Accessibility links
Libby Pleads Not Guilty in CIA Leak Case I. Lewis Libby, Vice President Dick Cheney's former top aide, pleads not guilty to charges against him in a case probing who revealed the identity of a covert CIA agent. He was arraigned in federal court in Washington, D.C., on charges of obstructing justice, perjury and making false statements.

I. Lewis Libby, Vice President Dick Cheney's former top aide, pleads not guilty to charges against him in a case probing who revealed the identity of a covert CIA agent. He was arraigned in federal court in Washington, D.C., on charges of obstructing justice, perjury and making false statements. 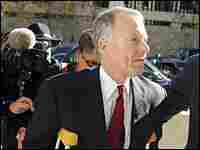 At the federal courthouse in Washington, DC, today Lewis "Scooter" Libby began what promises to be a long, fierce and closely watched legal battle. He pleaded not guilty to five counts, including obstruction of justice, perjury and making false statements. Those charges were brought last Friday by Patrick Fitzgerald, the special prosecutor looking into the leaking of a CIA operative's name. Coming up, we'll take a look at potential defense strategies and the political fallout at the White House. First to NPR's Laura Sullivan, who was in the courtroom today along with Libby's new legal team.

Lewis Libby and his new attorney seemed to make one thing clear today in the courtroom and outside the courthouse: They're ready to fight.

SULLIVAN: Ted Wells is a high-profile criminal defense lawyer Libby just hired from New York. He and William Jeffress, a lawyer who specializes in white-collar crime, are part of Libby's new legal team and new legal strategy. For the past 22 months, Libby's original lawyers had limited, if any, contact with the special prosecutor's office. The scene in the courtroom today could not have been more different. While Libby's original lawyer, Joseph Tate, sat at the far end of the table, Ted Wells crossed the courtroom and reached out his hand to special prosecutor Patrick Fitzgerald. The two men stood and chatted for 10 minutes. Wells flashed big smiles and occasionally got Fitzgerald to smile back. Wells even returned after the hearing to ask Fitzgerald to introduce him to the rest of his staff. But attorneys who know Ted Wells say don't be fooled by the pleasantries.

Mr. SCOTT FREDERICKSON (Former Federal Prosecutor): You hire Ted Wells when you're going to try a case, and Ted Wells will attack the government's case.

SULLIVAN: Scott Frederickson is a former federal prosecutor and associate independent counsel who investigated officials in the Reagan administration. He says if the case goes to trial, Fitzgerald may face other problems, as well, especially if he tries to call Libby's former boss, Vice President Dick Cheney, or officials Libby worked closely with.

Mr. FREDERICKSON: Most of the witnesses Mr. Fitzgerald is going to call are much more friendly to Mr. Libby, the defendant, than they are to the government's case, and counsel will take advantage of that.

SULLIVAN: Libby's attorneys also made it clear today they intend to subpoena reporters and their notes relating to the leak. Legal analysts say that could delay any prosecution for months. Libby won't be back in court until February 3rd. This morning, he waived his right to a speedy trial. His new lawyers will start reviewing some of the thousands of documents Patrick Fitzgerald has collected over the past two years, but it will be at least two months before they are even cleared to look at the classified papers in the pile. Laura Sullivan, NPR News, Washington.