Accessibility links
We Are Each Other's Business In high school, Eboo Patel failed to support a friend facing anti-Semitism. Now, the Chicago interfaith youth organizer believes honoring diversity means having the courage to actively speak up for it.

Listen
We Are Each Other's Business 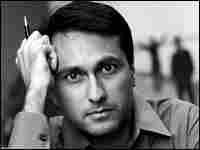 Eboo Patel is the founder and executive director of the Interfaith Youth Core, a Chicago-based organization fostering the international interfaith youth movement. He lectures worldwide on youth and religion and was a keynote speaker at the 2004 Nobel Peace Prize Forum. In 2002, Utne Magazine named Patel one of "thirty social visionaries under 30."

We live in a world where the forces that seek to divide us are strong. To overcome them, we must do more than simply stand next to one another in silence.

I attended high school in the western suburbs of Chicago. The group I ate lunch with included a Jew, a Mormon, a Hindu, a Catholic and a Lutheran. We were all devout to a degree, but we almost never talked about religion. Somebody would announce at the table that they couldn't eat a certain kind of food, or any food at all, for a period of time. We all knew religion hovered behind this, but nobody ever offered any explanation deeper than "my mom said," and nobody ever asked for one.

A few years after we graduated, my Jewish friend from the lunchroom reminded me of an experience we both wish had never happened. A group of thugs in our high school had taken to scrawling anti-Semitic slurs on classroom desks and shouting them in the hallway.

I did not confront them. I did not comfort my Jewish friend. Instead I averted my eyes from their bigotry, and I avoided my friend because I couldn't stand to face him.

My friend told me he feared coming to school those days, and he felt abandoned as he watched his close friends do nothing. Hearing him tell me of his suffering and my complicity is the single most humiliating experience of my life.

My friend needed more than my silent presence at the lunch table. I realize now that to believe in pluralism means I need the courage to act on it. Action is what separates a belief from an opinion. Beliefs are imprinted through actions.

I cannot go back in time and take away the suffering of my Jewish friend, but through action I can prevent it from happening to others.

Religious Perspectives on Globalization May 16, 2005