Listen
'Sudan: The Land and the People'

Tim Carney, the last American ambassador to Sudan before the United States downgraded relations in 1997, wants to promote a broader view of the country through a new collection of photographs. NPR foreign correspondent Michele Kelemen reviews Carney's book, Sudan: The Land and the People. 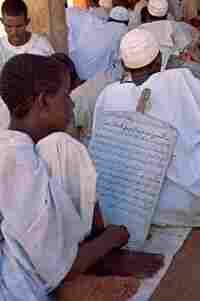 Coming up, ideas for how to find new music while traveling.

But first, the US ambassador to the United Nations says stronger sanctions may be needed against Sudan, where government-sponsored militias have been committing widespread atrocities against villagers in the Darfur region. We often think of Sudan as a place of conflict and famine, but it's also rich in resources and culture. And one former US ambassador, Timothy Carney, is trying to give Americans a broader view. NPR's Michele Kelemen reports.

This has been a busy retirement for Tim Carney, the last US ambassador to serve in Khartoum before the US downgraded relations in 1997. Though retired, he's been hired back by the State Department to serve in some hot spots, Iraq and now Haiti. And he's promoting his new book. It's not the usual policy analysis, but rather a coffee table photography book called "Sudan: The Land and the People."

Former Ambassador TIM CARNEY (Former US Ambassador to Sudan): You've got all the problems you can possibly imagine--ethnic, cultural, religious, problems of plurality and diversity and the failure to accept those realities--all of them coming together in Sudan today. And here on these walls I celebrated the diversity and the plurality of that country.

KELEMEN: Seventy of the 300 photos are on display in a Washington mansion that houses a cultural exchange center. At the opening, British photographer, Michael Freeman, an old friend of Carney's, said he approached the project with some trepidation because he knew little about Sudan--only, as he put it, some vague memories of famine and war. He photographed places untouched by tourism, including a crumbling medieval fortress on a bend in the Nile.

Mr. MICHAEL FREEMAN (Photographer): And what fascinates me about coming across this scene in the upper Nile was how little information we have since been able to glean about anything to do with that or the whole string of medieval forts along that part of the Nile.

KELEMEN: Freeman says he found northern Sudan bleak, even as he got close to the border of Egypt. But he also saw Sudan's riches and photographed the glimmer of a huge oil tank and the orange hues of an open-pit gold mine that he likened to Dante's "Inferno."

Mr. FREEMAN: For me, it reminds me of the heat and the dust and the sort of rather alien nature of the landscape.

KELEMEN: Freeman says Ambassador Carney's connections in Khartoum gave him wide latitude to travel Sudan, though always with minders. Like most outsiders, he had a limited stay in Darfur, and his pictures there are of refugees. Elsewhere, he tried to capture the Sufi traditions predominant in parts of Sudan: a whirling dervish and a line of men jumping, seemingly floating off the carpeted floor.

Mr. FREEMAN: What I was not concerned with was trying to capture the chanting and the movement because I realized that it would be much more interesting to make something that gives you a double take of them just standing there. But they're not. They're at the peak of the jump.

KELEMEN: He also captured a moment when two boys perched on a rock were drinking lake water through special guinea worm filters, given by The Carter Center, one of the sponsors of the book. Jimmy Carter's foreword to the book says, `Freeman caught the essential humanity of Sudan,' adding that he hopes the book will broaden the understanding of Sudan not only outside the country but among Sudanese themselves. Victoria Butler, Ambassador Carney's wife and a free-lance reporter, says this was one of the main ideas behind the book.

Ms. VICTORIA BUTLER (Free-lance Reporter): That you show people in pictures how big, how complicated and how much there is to learn about a place before you make a hard, fast opinion about a place.

KELEMEN: Ambassador Carney sought out the similarities among Sudan's diverse people. He pointed to a common interest in education, even if the infrastructure is starkly different.

Mr. CARNEY: And we saw many schools under mango trees in the South, as in the North we saw Islamic schools on the one and government schools where classes were crowded and where kids were neat as a pin and determined to learn.

KELEMEN: The book tries to offer some sense of optimism for a country that's been ravaged by 50 years of civil conflict between the mainly Arab North and the Christian and animist South, and now a separate but also long-brewing conflict in Darfur. Michele Kelemen, NPR News, Washington.

BRAND: And there are some stunning photos from the Sudan; you can find them at our Web site, npr.org.

More coming up on DAY TO DAY from NPR News. 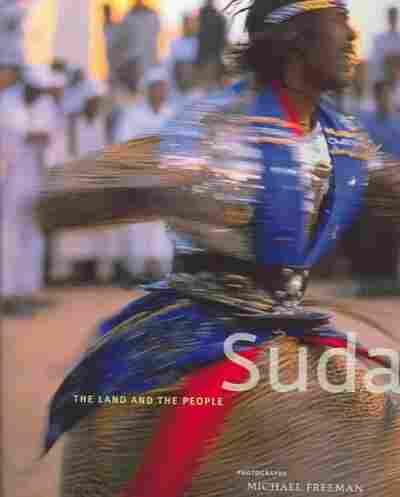 The Land And the People