Slate contributor Mark Jordan Legan offers a roundup of what movie critics are saying about the weekend's new film releases: Chicken Little, Jarhead and I Love Your Work. 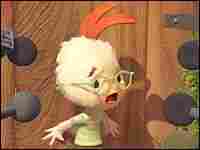 And finally, it's Friday, time again for our weekly digest of what film critics are saying about the new releases, compiled by the online magazine Slate. Here's Mark Jordan Legan with Summary Judgment.

First up in wide release, we have the gritty war film "Jarhead." Directed by Sam Mendes, the Academy Award-winning director of "American Beauty," this drama is based on the best-selling memoir of a young Marine's eye-opening experiences in the first Gulf War. It stars Jake Gyllenhaal and Jamie Foxx.

Unidentified Man: (As Private Swofford) Oh, I don't have a bugle.

Mr. FOXX: (As Staff Sgt. Sykes) You better play with your mouth.

LEGAN: Critics are split on this one. Rolling Stone likes the film, saying, `It keeps invading us with emotions. The jolt of "Jarhead" is undeniable, and it comes when you least expect it.' On the other hand, Variety claims, `It has numerous arresting moments, but never achieves a confident, consistent or sufficiently audacious tone,' and the LA Times shivers, `A cold film that only sporadically makes the kind of emotional connection it's after.'

Next up in limited release is the independent psychological drama "I Love Your Work." Co-written and directed by Adam Goldberg, Giovanni Ribisi plays a movie star losing his grip on reality. Christina Ricci also stars.

(Soundbite of "I Love Your Work")

Ms. CHRISTINA RICCI: (As Shana) You hate it.

Mr. GIOVANNI RIBISI: (As Gray Evans) It's not that I hate it. I just--I'm surprised, really.

LEGAN: The critics don't seem to love this work that much. Even though the LA Weekly cheers, `The filmmaking is quite polished and Ribisi is fascinating to watch,' most others agree with the Hollywood Reporter, which gripes, `Goldberg's direction is all flash and no substance, and his story and characters offer little reason for viewers to empathize with such self-pitying people. And Variety says, `"I Love Your Work" wallows in Hollywood hipster self-absorption.'

And finally we close with the Disney computer-animated feature "Chicken Little," adapting the famous fable. Once again, Chicken Little runs around panicking everyone that the world is ending, and without the backing of the United Nations. Zach Braff and Joan Cusack are just a few of the stars providing vocal talent.

Ms. JOAN CUSACK: (As Abby Mallard) You said the sky was falling. Your dad didn't support you.

Ms. CUSACK: (As Abby Mallard) And you have been hurting inside ever since, right?

Ms. CUSACK: (As Abby Mallard) There's a whole section about it in this month's Modern Mallard(ph)! According to Cosmo Duck(ph), you should stop the squawk and try the talk.

Ms. CUSACK: (As Abby Mallard) And Beautiful Duckling(ph) says avoiding closure with your parents can cause early molting. See, closure.

LEGAN: Not that your little tykes will care, but the nation's critics are kind of split on this cartoon. Even though the Hollywood Reporter raves that it's `a consistently amusing, often inspired family romp,' Newsday moans, `No matter how technically proficient a movie's visual effects, they mean nothing without wit, cunning and soul.' And The Arizona Daily Star clucks, `"Chicken Little" will likely get the treatment of Disney mediocrity: only three direct-to-video sequels and no traveling ice show.'

Wouldn't you know it? Chicken Little runs around saying the sky is falling; it doesn't. But then his entire species gets the bird flu. Not an easy time to be poultry.

BRAND: DAY TO DAY is a production of NPR News with contributions from slate.com. I'm Madeleine Brand.