Accessibility links
Lots to Love on Stevie Wonder's 'A Time to Love' Stevie Wonder's new album A Time To Love is his first in a decade. He collaborates with Prince, gospel singer Kim Burrell and his own daughter, Aisha Morris, last heard splashing in the tub on the 1976 hit "Isn't She Lovely."

Listen
Lots to Love on Stevie Wonder's 'A Time to Love'

Stevie Wonder's new album A Time To Love is his first in a decade. He collaborates with Prince, gospel singer Kim Burrell and his own daughter, Aisha Morris, last heard splashing in the tub on the 1976 hit "Isn't She Lovely." 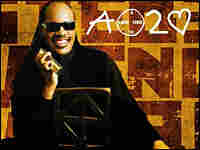 For the first time in 10 years, there's a new album from Stevie Wonder. It's called "A Time to Love," and on it, Wonder collaborates with Prince, gospel singer Kim Burrell and his own daughter. Critic Tom Moon says the new disc contains several songs that are sure to become Stevie Wonder classics.

Mr. STEVIE WONDER: (Singing) You can't ...(unintelligible) us and desert the call. You can't hear their cries and just close your door.

Unidentified Woman: (Singing) You can't say you're down and not take it to the wall.

MOON: In a voice that's simultaneously poised and outraged, Wonder shouts down hypocrisy and the elite politicians who barely pretend to care about the poor.

MOON: This is one of several songs on his new CD that feels chillingly relevant in the aftermath of Hurricane Katrina.

Mr. WONDER: (Singing) You can't free the slaves to enslave them differently. You can't feed them right only from your sight. You can't see the wrong and just go along.

Unidentified Woman: (Singing) Oh, is that the way you would your faith to breed?

MOON: On the CD's title cut, Wonder worries that people have lost the ability to feel compassion.

(Soundbite of "A Time to Love")

MOON: Alas, not every track is a tirade. The disc is called "A Time to Love," and that means romance is on the menu. There's a song called "Sweetest Somebody I Know," another called "From the Bottom of My Heart." There's "My Love is on Fire," "Passionate Raindrops" and, of course, a song called "True Love." Let's face it, Stevie Wonder gets away with more sap than just about anybody.

MOON: But somehow Wonder redeems that sap, just lifts it right up, by the way he sings. Check out this song, which glances back to the breezy melodies of his 1972 classic "Talking Book."

Mr. WONDER: (Singing) There is something on my mind that's in my heart, written on my face. And it would behoove me in my soul if I didn't state my case.

MOON: Between Wonder's sentimental journeys are several amazing pop songs that seem to almost float above the ground.

MOON: In a different era, you wouldn't be able to escape this song on the radio.

MOON: It took the once-prolific Stevie Wonder 10 years to make this album. When the production's particularly thick, you can hear the labor. Sometimes his intent gets lost inside all the pleasant-sounding, high-gloss goop. Thankfully not everything is that fussed over. Wonder still sings in a delighted, wriggling way, like he just dreamed up the melody a minute ago. He's playing around. Nothing's on the line; he just wants to see how far he can stretch it. That spontaneity, which is crucial to all the great Stevie Wonder music, lights up at least six of the 15 tracks here. It's energy that's been missing from pop music for a long time, and it's nice to have it back.

NORRIS: The new album from Stevie Wonder is "A Time to Love." Our reviewer is Tom Moon.

Mr. WONDER: (Singing) Don't ask me why am I such an optimist, when it's a (unintelligible) for both to be a pessimist, from within 75 percent of what we read here in you. Well, I used to have a friend that made me represent, who used to always say when she was livid, like fine wine and like seeing the glass of life as half full and half empty. I'm not saying sometimes life can't be rough, but never gonna find me saying I've had enough.