Accessibility links
Non-Proliferation in the 21st Century Conceived in the 1960s, the Nuclear Non-Proliferation Treaty (NPT) is the single most important legal tool that the world has to try to stop the spread of nuclear weapons.

Non-Proliferation in the 21st Century

Non-Proliferation in the 21st Century

Talk of the Nation Live Broadcast: Sixty Years of Trying to Control the Bomb

Talk of the Nation Live Broadcast: Nuclear Threats Past and Present

When the Nuclear Non-Proliferation Treaty was first proposed, many non-nuclear states were willing to give up all interest in nuclear weapons, because they knew their neighbors were committing themselves to do the same. At the moment the non-nuclear states don't seem to realize just how important a bargain this has been. 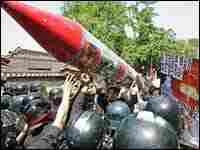 South Korean protesters carrying a mock North Korean missile are blocked by riot policemen at a rally in Seoul, May 4. Reuters hide caption

Every American citizen today has at least the right to ask, are we doing at the governmental level all we can do to prevent a nuclear attack on America? The simple answer is no, we are not.

Former Sen. Sam Nunn, in a speech to the National Press Club

To compel Iran to abide by its obligations under the Nuclear Nonproliferation Treaty, which includes submitting to full inspections and safeguards, the Security Council must be prepared to impose the entire range of sanctions — diplomatic, economic, and military.

The Nuclear Non-Proliferation Treaty (NPT) is the single most important legal tool that the world has to try to stop the spread of nuclear weapons.

It was conceived in the 1960s, when many world leaders feared that nuclear weapons would spread to as many as 25 nations. And the treaty has helped to limit their spread. But nuclear weapons have proliferated nevertheless. Three states with the bomb remain outside the treaty, and several of those states that signed it have cheated.

The NPT was negotiated in 1968, with the United States becoming one of the first to sign. It was ratified and went into force in 1970, initially with a term of twenty-five years. In 1995, all the signatories of the treaty came together at the United Nations in New York and extended the its term indefinitely.

A total of 188 nations have now signed the treaty.

It divides the world into nuclear weapons haves and have-nots, based solely on the world that existed in 1968. Then only the United States, the Soviet Union, Great Britain, France and China had acquired nuclear weapons. The treaty recognizes them as the only legal nuclear weapons states.

The rest of the signatories were required to pledge not to acquire nuclear weapons. But in exchange, the treaty acknowledges their right to peaceful nuclear energy. And the nuclear weapons states pledge that at some future point, they will give up their nuclear arsenals.

France is believed to have some 400 warheads, China 300 and Great Britain about 200.

Three nations possess nuclear weapons and are outside the treaty, that is, they have never signed it. They are India, Pakistan and Israel. The NPT requires its signatories to refuse civil nuclear cooperation with states that have refused to sign.

Iran is also an NPT signatory, but it developed a nuclear program in secret. Iran's leaders insist it is purely civilian in nature, but many suspect Iran of seeking nuclear weapons. Right now, there is no evidence that Iran possesses a nuclear bomb.