Accessibility links
Behind the Scenes with Film Editor Walter Murch To Oscar-winning film editor Walter Murch, whose latest film is Jarhead, what you hear -- or don't hear -- is as important as what you see on the big screen.

Listen
Behind the Scenes with Film Editor Walter Murch

This story was produced by Steve Lickteig.

In the world of filmmaking, actors and directors dominate the spotlight. The people who actually assemble the film frame by frame and beat by beat toil in relative obscurity. Walter Murch is one film editor whose profile is much higher than most. 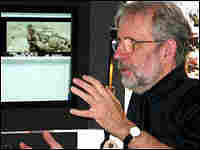 Walter Murch at a New York postproduction facility where the final edit of Jarhead was made. Sean Cullen hide caption 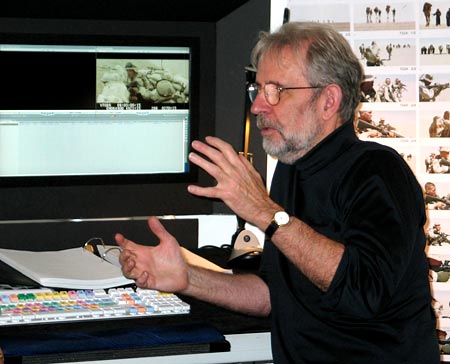 Walter Murch at a New York postproduction facility where the final edit of Jarhead was made.

Murch discusses the system he uses to remember his initial reaction to scenes long after they've been shot.

Murch has won three Oscars. He has been nominated in sound and or editing categories eight times. His films include Apocalypse Now, all three Godfather films, The English Patient, The Unbearable Lightness of Being, Ghost and The Talented Mr. Ripley.

His latest film, Jarhead, is based on former Marine Anthony Swofford's best-selling book about the Persian Gulf War. Murch discussed that film, and his job as editor, in a New York postproduction facility where he had finished up work on Jarhead.

Murch is a man of many interests. He composes music, translates Italian poetry in his spare time and if you spend enough time with him, you're likely to hear him quote French philosophers or string theorists. But his definition of what he does is simple.

"My job as an editor is to gently prod the attention of the audience to look at various parts of the frame," he says. "And I do that by manipulating, by how and where I cut and what succession of images I work with."

Sound is equally important to Murch's work. It's "a huge influence on people's attention," he says.

To demonstrate, Murch flips on his computer, clicks the mouse a few times and instantly pulls up a scene from Jarhead. Swofford's character, played by Jake Gyllenhaal, is in combat for the first time and there's an artillery barrage. Everyone else ducks for cover, but he stands up. And the camera moves closer to him. Then, in the distance, there's a muffled explosion followed by dead silence.

This fleeting silence is a golden moment for an editor -- a chance to put the audience right there on the battlefield. Jarhead's director, Sam Mendes, originally wanted that silence to stretch for several seconds. But Murch came up with a better idea.

Pieces of dust and sand from the explosion hit the actor's face in slow motion. Then you hear the sound of the particles hitting his face. "My combat action has commenced," the character says.

Murch says the tiniest of sounds can help create the sense of silence in a film. "By manipulating what you hear and how you hear it -- and what other things you don't hear -- you can not only help tell the story, you can help the audience get into the mind of the character," Murch says.

Ironically, Murch begins the editing process with the sound turned off.

"If I had the sound up, it would tend to take all of my attention..." he says. "It would crowd out the possibilities for other sound. And then only after the scene has found its shape, then I turn the switch on and let the sound come in. And frequently there will be two sounds that come together, two lines of dialogue and I'll think, that's great that that happened by accident."

The editing process is tedious work -- viewing hours of footage, then assembling a film a half-second at a time. "I like to think this is sort of a cross between a short-order cook and a brain surgeon," Murch says. "Sometimes you're doing incredibly delicate things. Two frames different will mean whether the film is a success or not..."

In an excerpt from The Conversations: Walter Murch and the Art of Editing Film by Michael Ondaatje, Murch explains why viewers aren't disturbed by sudden transitions and other forms of editing in films. (Ondaatje's books include The English Patient, the film version of which Murch edited.)

Murch: There are underlying mathematical influences that determine how a film gets put together, which are amazingly consistent, seemingly independent of the films themselves. Over the years, I've come to rely on these influences -- navigation points -- as I work on each film. For instance: 2.5 -- an audience can process only two and a half thematic elements at any moment; 14 -- a sustained action scene averages out to fourteen new camera positions a minute; 30 -- an assembly should be no more than thirty percent over the ideal running length of the film. But these are perhaps just islands above a larger submerged continent of theory that we have yet to discover.

Actually, when you stop to think about it, it is amazing that film editing works at all. One moment we're at the top of Mauna Kea and -- cut! -- the next we're at the bottom of the Mariana Trench. The instantaneous transition of the cut is nothing like what we experience as normal life, which seems to be one continuous shot from the moment we wake until we close our eyes at night. It wouldn't have been surprising if film editing had been tried and then abandoned when it was found to induce a kind of seasickness. But it doesn't: we happily endure, in fact even enjoy, these sudden transitions for which nothing in our evolutionary history seems to have prepared us.

Ondaatje: What do you think is going on?

Murch: Well, many things -- not least of which are the visual dislocations that happen all the time when we dream. I believe that one of the secret engines that allows cinema to work, and have the marvelous power over us that it does, is the fact that for thousands of years we have spent eight hours every night in a "cinematic" dream-state, and so are familiar with this version of reality.

On the other hand, here's a wonderfully simple experiment which clearly shows that our visual cortex is also routinely editing our perceptions -- while we are wide awake -- without our ever being aware of it. Stand about eight to ten inches from a mirror and look at your left eye. Now look at your right eye, and then back at your left eye. Do this five or six times in quick succession. You will not notice any movement -- your eyes will seem to be completely still. But this is in fact not the case, as an observant friend will immediately tell you: your eyes move quite a lot with each shift of focus.

The blurred swish during the movement of the eye is somehow snipped from our conscious awareness, and we are left with just the significant images before and after the movement. Not only do we not see the blurred movement, we are unaware that anything has been removed. And this is happening all the time: with every movement of our eyes, an invisible editor is at work, cutting out the bad bits before we can ever see them.