Listen
Cheney's New Chief of Staff Is Much Like His Boss 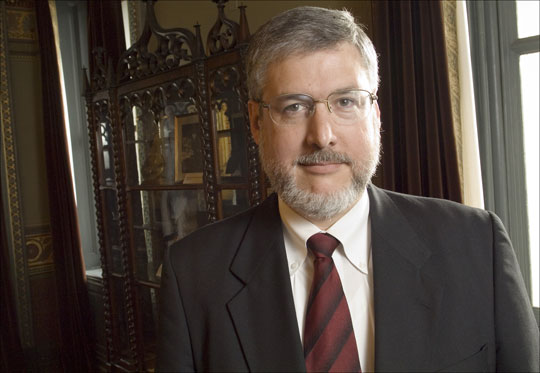 *Met Dick Cheney while working as an attorney for the House Intelligence Committee, which Cheney sat on in the 1980s.

*Served as general counsel at the Pentagon after Cheney was picked as defense secretary in 1989.

*Addington then became president of a political action committee formed to explore a Cheney president bid.

*During the Clinton years, Addington did a stint in private practice at Baker, Donelson, Bearman & Caldwell, then served as general counsel to the American Trucking Associations.

*In 2001, Cheney called on Addington again to serve as the new vice president's general counsel. He soon became embroiled in some of the Bush administration's most controversial policies. He fought environmentalists' efforts to disclose the names of energy industry officials who met privately with Cheney as he drafted his energy plan.

*Fought similar efforts by the Sept. 11 commission seeking information from the White House. He then helped draft a controversial memo justifying "coercive interrogation techniques" to question members of Al Qaeda and other terrorism suspects.

There's been a personnel shuffle at the top of the vice president's office. After Cheney's chief of staff, Lewis Libby, was indicted and resigned, the Vice President tapped David Addington to fill the role.

"He's very much a reflection of his boss," says Bradford Berenson, who worked with Addington in the White House Counsel's office. "The same kinds of adjectives that you would think of in conjunction with the vice president -- smart, loyal, discreet, tough – are precisely the adjectives that anyone would apply to David Addington."

There have also been less positive adjectives used to describe Addington. One former colleague who would not speak on tape dubbed him, "Keyser Soze," after the shadowy, ruthless villain in the movie The Usual Suspects. (Addington is notoriously reluctant to be interviewed, and the vice president's office declined an interview request for this story.)

Those who have worked with him say he's not just devoted to Cheney, but to the primacy of presidential authority. Bruce Fein, a D.C. attorney who worked with Addington on the Iran-Contra Committee, notes that they both entered the profession "at a time when presidential powers were at their ebb, in the aftermath of Nixon's disgraceful resignation."

"So this mindset set in, 'We need to rebolster the president's authority,'" Fein says. "And I think that David has continued to retain these ideas, which I view as being more museum pieces now than reality."

After the Sept. 11 attacks, when Addington was counsel to the vice president, he had a chance to implement some of his views on executive power. People involved in White House policy discussions are not allowed to talk publicly about decision making. But they say Addington had a hand in nearly every controversial executive legal declaration related to the war on terror. Addington helped draft the policy that said terror suspects would be tried before military commissions. And he worked on a now-repudiated Justice Department memo that offered a narrow definition of torture.

That makes this an interesting time for Vice President Cheney to promote Addington to chief of staff. "It suggests that (Cheney) is not in the mood to compromise," says Yale Law School professor Jack Balkin. "And he is not willing to back down."

The White House is now clashing with the Senate over detainee treatment. Twice, the Senate has voted in favor of an amendment that would prohibit "cruel, inhuman, or degrading treatment or punishment of persons under custody or control of the United States government." The president has promised a veto.

Balkin sees Addington's appointment as a signal that the White House is responding to increasing criticism by circling the wagons. "You have a president in his second term in office. You have senators of his own party who feel less obligated to him," says Balkin. "They want to make a name for themselves. You're four years after 9/11, and generally speaking, the longer things go on, the more people are likely to take a second look at what's happening."

Balkin says that means Addington and Cheney will have a much harder fight on their hands now than Cheney and his first chief of staff, Lewis Libby, did four years ago. And those who know Addington say he's the type who will always choose a fight over a compromise.