Accessibility links
Economic Despair, Racism Drive French Riots In France's worst civil unrest in 40 years, nightly riots raging in the immigrant communities of Paris' suburbs have spread to some 300 cities. A look at the tensions underlying the riots. 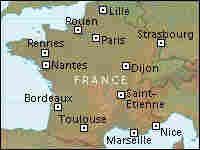 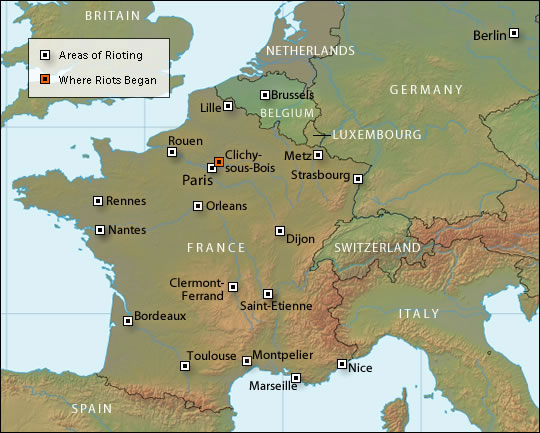 Major sites of rioting in France. 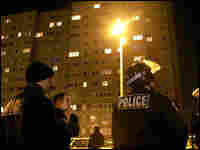 French police secure a position in Clichy-sous-Bois, north of Paris on another night of violence late Nov. 8, 2005. Reuters hide caption

Nightly riots raging in the immigrant communities of Paris' suburbs for the past two weeks have spread to some 300 cities around France. Thousands of cars and buses have been torched, as well as commuter trains, businesses, community centers and schools. So far, one person has died in the violence, a 61-year-old man who was beaten into a coma. In its worst civil unrest in 40 years, the government has invoked emergency powers for the next 12 days, allowing local officials to enforce curfews as needed.

The riots, which began Oct. 27, were triggered by outrage over the deaths of two teen-agers who were accidentally electrocuted in a substation in the Paris suburb of Clichy-sous-Bois. They were allegedly hiding from police. The mayhem sweeping neglected and impoverished neighborhoods with large African and Arab communities is forcing France to confront anger that has been building for decades among residents who complain of discrimination and unemployment. A look at the tensions underlying the riots:

Life in the Suburbs

Unlike America, the rougher neighborhoods in France are more likely to be in the suburbs than in the inner cities. It's the result of decades of a deliberate government urban policy to concentrate immigrants and their families in well-defined districts away from city centers. In theory, the creation of immigrant communities would provide a support system. In practice, the urban housing policy has left many living in poorly maintained high-rises, similar to those that have largely been torn down in American inner cities.

Waves of postwar immigrants from Algeria and Morocco were initially settled in these suburban districts. Many living there now are third generation French, but there are also new waves of immigrants from sub-Saharan African. The majority of the rioters are young people who've grown up in these immigrant communities.

"Most people in these communities are against the violence," says Eric Favreau, a French social commentator. "The inhabitants don't want it. The Muslims don't want it. Even the drug dealers don't want it. But the problems in these suburbs have been left to stagnate for 30 years, and somehow they're right. The more they burn cars, the more we pay attention to them."

These suburbs have become recognized trouble spots, with 751 districts designated as "sensitive urban zones." The areas qualify for special aid programs, but not because of their minority makeup; their overall economic profile tags them for help. Unemployment in these districts, at 19.6 percent, is double the national average. The rate jumps to more than 30 percent for people between 21 and 29 years old. Incomes are 75 percent below the national average, according to the Christian Science Monitor.

France has the largest immigrant community in the European Union, with unofficial estimates putting the Arab and African community at 10 percent of the country's 60 million people. Islam is the primary religion in these communities, though police have emphasized the riots do not seem to be driven by Islamic groups.

A Republican Model of Integration

Some of those living in these communities say they are denied an ethnic, minority or religious identity by the government. This sentiment ties directly into the French ideal of a model society, which can be traced back to the 1789 Republican revolution. By law, there are no categories of Arab-French or African-French, only French. The policy in theory makes France a color-blind state where everyone is treated equally, and thus racial discrimination is prevented. Officially, the government isn't even allowed to collect statistics based on race or national origin.

But immigrant advocates say the policy has backfired, leaving minorities, who receive no special recognition or rights from the government, disenfranchised and voiceless. Islam is the country's second most represented religion, after Catholicism, and despite an estimated 7 million French who are of Arab or African origin, they have no political representation in the National Assembly; not a single member is of Arab or African descent.

The riots over the past two weeks have mainly been fueld by frustrations over a lack of economic opportunity, and racial discrimination, but religious tensions do play a role. The Muslim community clashed with the government in early 2004, when 10,000 Muslim men and women demonstrated against a government ban on head scarves in public schools. The government argued that the presence of religious symbols and scarves in schools violated a century-old decree of absolute secularism in schools. French Muslims objected, saying the law violated their religious rights.

The riots are seen by some as a cry of distress from France's minority youths. Despite the government's attempt to avert racism with its policy of "one France," immigrants and their descendants say they deal with racism on a daily basis. Hasam Chefeg, in his late 20s, says young North Africans have trouble finding work in France. "Because my face is Moroccan and my name is different -- it's Moroccan, too -- they don't consider even my CV," he said. "If you send another letter to the same employer with the typical French name like Pierre or Jacques, then the employer calls you back immediately."

Samir Mihi, a member of a Muslim community in a Parisian suburb, has been working to calm the neighborhoods. He says it's not easy: "The one thing that keeps coming back is the kids' bad rapport with the police. They're constantly put through abusive ID checks and treated aggressively. And they're supposed to respect the police, but the police don't respect them."

Awaz Dehkani, a high school teacher in the Paris suburb of Trappes, has talked with her students about the riots, and the source of the anger fueling them. Her students told her, "They feel that you play the game, you go to school, you do everything that, you know, that society and everybody wants you to do, and in the end, even with many degrees, they don't want you. We have no real laws to protect people from discrimination like you do have in the States."

France has traditionally relied on immigrants to supply its work force, but an economic downturn and fears stemming from the terrorist attacks in New York, Madrid and London have driven a right-wing movement across Europe to reduce immigration from outside the European Union and apply stricter requirements for asylum seekers. The riots have provided a platform for the French right wing to promote its views on immigration.

"We have to close the borders to stop the migratory invasion and send the army into the suburbs to re-establish order," says Phillipe de Villiers, head of the Movement for France Party. "There's one simple message to these youths: France, you either love it or you leave it."

The government's first response, while not endorsing conservative views on immigration, was not one of reconciliation with France's immigrant community. Calling the riots unacceptable and inexcusable, Prime Minister Dominique de Villepin said the state's response would be "firm and just ... The priority is the re-establishment of public order and security in the face of those who threaten it, and they will be severely punished."

Interior Minister Nicolas Sarkozy drew criticism when he called the rioting youths "scum" and "hoodlums" and vowed to clean out the suburbs with a power hose. Despite protests from suburban community leaders, Sarkozy's approval ratings remain at 57 percent.

But two weeks into the riots, Prime Minister Villepin's tone has changed: "We must be lucid. The Republic is at a moment of truth," Villepin said at a parliamentary debate Tuesday where lawmakers spoke frankly about France's failings.

"The effectiveness of our integration model is in question," the prime minister said. He called the riots "a warning" and "an appeal."

Compiled from NPR reports and the Associated Press