Accessibility links
'Get Rich or Die Tryin'': Partly Artistic, Partly Pulp The film Get Rich or Die Tryin' opens in limited release Wednesday. Critic Kenneth Turan says that while director Jim Sheridan turned out a quality film, it's marred by Sheridan's use of salacious material.

The film Get Rich or Die Tryin' opens in limited release Wednesday. Critic Kenneth Turan says that while director Jim Sheridan turned out a quality film, it's marred by Sheridan's use of salacious material. 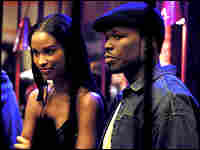 Nothing encapsulates "Get Rich or Die Tryin'" better than the notorious billboard image of star Curtis "50 Cent" Jackson" with a gun in one hand and a microphone in the other.

Kenneth Turan is a film critic for MORNING EDITION and the Los Angeles Times.

TURAN: It was a bad idea to promote that likeness near schools, but it certainly tells you everything you need to know about the film it advertises. "Get Rich" is a motion picture with one foot in artistic expression and one foot in "Pulp Fiction." It wants the respect that goes with a quality production, but it can't give up on providing the sex and violence the film's core audience demands. But giving in to its bad side, though likely a shrewd box office move, robs the film of some of its power and effectiveness.

That "Get Rich or Die Tryin'" has our sympathy for any length of time is due largely to hiring Irish filmmaker Jim Sheridan to direct. Best known for Oscar-nominated movies like "In the Name of the Father," Sheridan may have seemed like an unlikely director for this ghetto melodrama, but he wasn't. That's because the underclass dynamic of America's inner cities is not that far removed from Sheridan's comfort zone of the bleak experience of Catholics in Northern Ireland. Not dazzled by rap mythology, Sheridan's more in sympathy with, than in awe of, this story's events.

The film's delicate balancing act between dramatic realism and overworked genre material works for a time. Past a certain point, however, the brutality that is an essential part of the story overstays its welcome. The cycle of violence repeats itself with so many endlessly repetitive shootings and stabbings that the film's embrace of maximum exploitation becomes frustrating. With the audience for things with the 50 Cent brand being so large, the filmmakers couldn't pass up the opportunity to make "Get Rich" as nakedly commercial as possible. They couldn't risk losing so much as a penny of its considerable money-making potential. What it lost instead was a piece of its soul.

Unidentified Singer #1: Yeah, this is my tape, man. Listen to my tape.

Unidentified Singer #3: Whoo! If I was your best friend, I want you around all of the time...

Unidentified Singer #4: I want you around me all of the time.

Unidentified Singer #3: ...because I'll be your best friend if you would promise you'll be mine.

Unidentified Singer #3: Please say he's just a friend. If I was your best friend, I'd want you around all the time...

Unidentified Singer #4: I want you around all the time.

Unidentified Singer #3: ...because I'll be your best friend if you would promise you'll be mine.