Accessibility links
'Abducted': The Myth of Alien Kidnappings Harvard University psychologist Susan Clancy is the author of the new book Abducted: How People Come to Believe They Were Kidnapped by Aliens. She speaks with host Madeleine Brand her years of research and conversations with people who believe themselves victims of alien abduction.

Harvard University psychologist Susan Clancy is the author of the new book Abducted: How People Come to Believe They Were Kidnapped by Aliens. She speaks with host Madeleine Brand her years of research and conversations with people who believe themselves victims of alien abduction.

Despite any credible scientific evidence, most Americans believe that space aliens exist. And a substantial number of them believe that those aliens have visited this planet, and some of them believe that they were actually abducted by aliens. They are the subject of a new book. It's called "Abducted: How People Come To Believe They Were Kidnapped by Aliens," and it's by Harvard psychologist Susan Clancy. And Ms. Clancy joins me now.

Ms. SUSAN CLANCY (Author, "Abducted: How People Come To Believe They Were Kidnapped by Aliens"): Thank you. Thank you for having me.

BRAND: So how did you get into this field of study? I'm wondering if it raised a few eyebrows there at Harvard.

BRAND: Well, I mean, how can you take them seriously, honestly? I mean, is it sort of like people who say that Elvis is still alive or that the Earth is flat? How do you--I mean, really, how do you talk to them with a straight face?

Ms. CLANCY: It's actually easier than you would think. First of all, what's important to know is that most people who believe that they were abducted by aliens don't have vivid memories of what happened. They just suspect they might have been abducted based on certain experiences that they've had or symptoms that they've had that are consistent with what they've read about or watched on TV or seen in the movie screen, you know, about what happens to people when they've been abducted.

BRAND: And what are some of the stories? What do they say happened to them?

Ms. CLANCY: The modal subject I spoke with typically had a number of sleep experiences that they thought were strange. For example, maybe they've had an episode of sleep paralysis. Yeah, it's essentially common. You wake up in the middle of the night, you can't move. It's a very scary experience. It lasts for about a minute; many people have it. And for the alien abductees I spoke with, some of them had that episode and they woke up and they thought, `Oh, my God. What was that?' And then later on in their lives, they read something or saw something on TV and they said, `You know, what happened to me that night is a lot like what happened to Bud Hopkins' subjects or what I saw on "Close Encounters of the Third Kind."' Bud Hopkins is an abduction researcher who's written a number of books about the stories that his subjects remember under hypnosis.

BRAND: And with the people that you interviewed, do they have a sort of a similar story line? Does each one have a similar tale, they were visited at night and taken up in a spaceship and experimented on?

Ms. CLANCY: They all talk about the same basic plot. So aliens came down from somewhere and they abducted me from my bedroom or my car and they took me into some kind of spaceship and then they performed sexual or medical experiments. So the plot is very similar. However, the details vary widely depending on who you're talking to. So what the aliens were wearing, what exactly they looked like, what types of medical devices were used, that kind of thing, all vary greatly.

BRAND: What's with the experimentation? Why do they all say they were sexually or physically experimented on?

Ms. CLANCY: Well, OK, the way I'd answer that is I'd say, first, alien abductions were depicted in the movies and on TV before people said it happened to them. And I get challenged on this a lot because somebody will call and say, `I was abducted when I was six and I'm 81 now, and I never saw a TV show when I was six about alien abduction.' However, what they're omitting is that they only remembered what happened to them when they were six in hypnosis sessions later on in life.

So I just want to stress that nobody reported being abducted before they actually saw it on TV or in the movies. So there was in the '60s a number of episodes on "The Outer Limits" that featured aliens. In some of them, they came to Earth and performed medical experiments.

BRAND: Well, what would the people say, the people you interviewed, say when you pointed out to them some other explanations for what happened to them, some, you know, more plausible explanations like, as you say, sleep paralysis or the fact that they were steeped in popular culture?

Ms. CLANCY: I never encountered a positive reception to my interpretation of a story. In fact, as is discussed in the book, on a number of occasions, people really became angry. So I sort of left my side of the picture out. A lot of people say, `Now that you've written this book, what do your subjects think?' and I can tell you most of them that have read the book are upset. I have to be honest with that. And I understand why, because what's happening in the book is I am presenting my own opinion, but I'm challenging their deeply held beliefs, beliefs that are very important to them. And whenever you challenge someone's beliefs, you're bound to meet up with some animosity.

So they're angry, and I feel terribly about it. And, you know, you got to understand that I'm sure in their heart of hearts, they were hoping that the book or the research would emerge with me saying, `Yes, I've studied this and I think these accounts are plausible.' And I just can't do that because there is a better explanation. But that being said, I can't dismiss their accounts. There's no way to scientifically disprove the alien abduction hypothesis.

BRAND: You say there are all sorts of ways that we handle distressing incidents in our lives and no shortage of people out there to help us figure it out by buying their books or something, but...

BRAND: ...I'm wondering--you know, this is a very elaborate and consuming belief and something that these people are well aware of makes them look kind of crazy. So I'm wondering why...

BRAND: You know, why do they choose this rather than something more conventional?

Ms. CLANCY: I think that it is because coming to believe you're abducted by aliens provides you, of course, with an explanation for psychological distress or problems you might have had. But even more than that, believing that you've been abducted by aliens provides many of these subjects with a meaning for their entire life. And I think that part of the alien abduction experience has been de-emphasized by abduction researchers in the past, like Bud Hopkins, who tend to focus on the more traumatogenic aspects of the experience. I mean, it is true; it's nightmarish, it's horrible, they're scary, they come in the night, they hurt you. I mean, why would you want to think--why would you want to believe that happened to you if you didn't have to?

But at the end of my research study, we asked very single subject: `If you could do it all over again, would you choose not to have been abducted?' And I never had a single subject say, `I wish it didn't happen to me.' They all said the same thing, that science does not explain everything in the world, that there is a higher power out there and that `I was chosen.'

BRAND: Well, it sounds very religious to me.

Ms. CLANCY: Yes. But you know what? I am so tired of controversial topics that I think I just want to stay away entirely from the topic of religion. All I would like to say is that in the same way that people find meaning in their religious beliefs and experiences, these people find meaning in their alien abduction beliefs and their alien abduction experiences.

BRAND: Susan Clancy is the author of "Abducted: How People Come To Believe They Were Kidnapped by Aliens."

And, Susan Clancy, thank you for joining us.

Ms. CLANCY: Thank you. It was a pleasure. 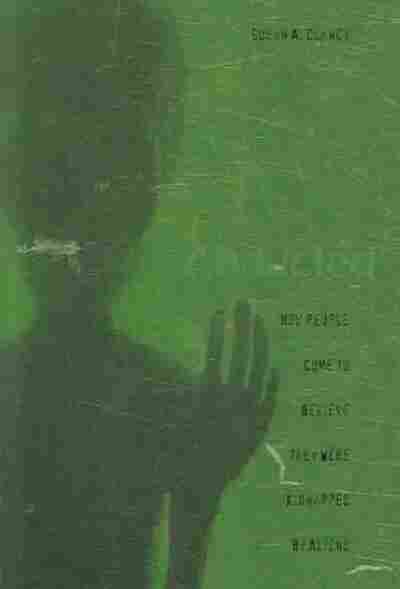 How People Come To Believe They Were Kidnapped By Aliens

by Susan A. Clancy

Title
Abducted
Subtitle
How People Come To Believe They Were Kidnapped By Aliens
Author
Susan A. Clancy