Updike describes this Hopper painting, People in the Sun, 1960, as "unreal," both in terms of its landscape and its characters. Edward Hopper/Smithsonian American Art Museum hide caption 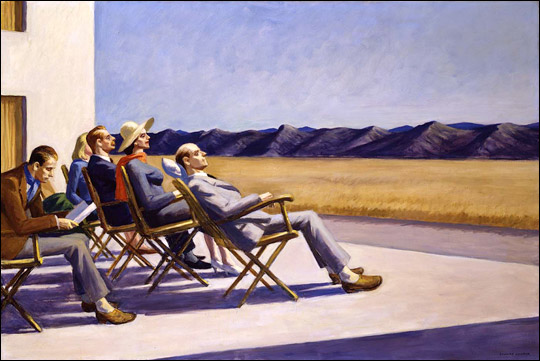 Updike describes this Hopper painting, People in the Sun, 1960, as "unreal," both in terms of its landscape and its characters.

For decades now, John Updike has chronicled Middle America. Rabbit Run, Rabbit at Rest and The Witches of Eastwick are just a few of the many novels he has written. The 73-year-old author, acclaimed for his fiction, is also a prolific essayist.

Updike's new book, Still Looking, collects pieces he has written on American art, many of which first appeared in The New York Review of Books. Susan Stamberg talked with Updike about his relationship with art, and about the artists he highlights in his new book.

Below is an excerpt from the essay Hopper's Polluted Silence, reviewing a 1995 Edward Hopper exhibition at the Whitney Museum of American Art. The essay is collected in the book Still Looking:

Hopper's colors turned cooler and chalkier as he aged: the warm brick- and plush-reds of his New York paintings receded. A western painting, People in the Sun (1960), is almost comically unreal -- unreal in the Thirties-syle street clothes of the fully garbed sunbathers, unreal in the un-Hopperesque lack of any architectural definition of their porch or platform, unreal in the applique-like strips of generalized desert landscape. It has no atmosphere but psychological atmosphere; the people, dressed for a luncheon party, seem to be on the deck of a boat without a glimpse of water, and, placed all on the left side of the canvas, appear to be sliding toward the sun. In Second Story Sunlight, painted the same year, the white gables and tall windows and ominous tree-mass are less surreal but feel cardboard-thin, slapped up as a setting for the two actresses, the gray-haired matron and the well-endowed bathing beauty. From their dreaming gazes they might be versions of the same woman, the older remembering the younger as the painter is remembering them both. Reminiscence and self-parody are part of remaining true to oneself. Now in his late seventies, the old conjurer is calling up images with hardly a glance out the window. Chair Car (1965) shows not a fleck of scenery through the big glass panes, and its interior, without racks or a door handle and a as high-ceilinged as a little chapel, might have been painted by a man who never rode a train. But Hopper for forty years had been doing more than giving the visual news. Gail Levin's essay on Hopper's "Legacy for artists" quotes the sculptor George Segal as saying, "What I like about Hopper is how far poetically he went, away from the real world."

Without turning to an inner reality, Hopper could not have created Hoppers. they give us back a now-historic world, with its Automats and empty roads and gilded movie palaces, preserved by a still-potent intimacy. While the centrally housed video at the Whitney unignorably droned and shuffled its iconography of "American imagination," Hopper's quite personal silence spoke. Having stood before each of the fifty-nine canvases displayed on the third floor, this viewer at the elevator door had an impulse to run back in again, as at some lovelorn parting, and make the encounter yield a final word torn from the depths of what Henry James might have termed "the so beautifully unsaid."

Reprinted from the book Still Looking by John Updike. Copyright: (c) 2005 by John Updike. Published in arrangement with Alfred A. Knopf, a division of Random House, Inc. 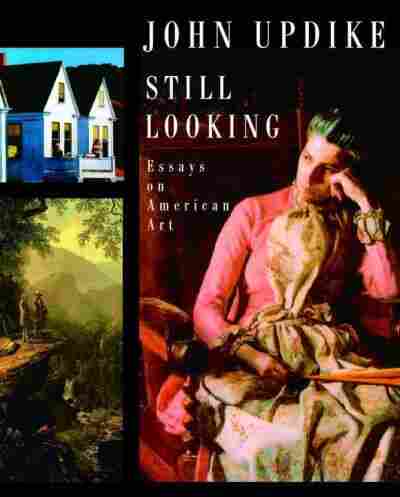