Accessibility links
For 30 Years, a Political Battle Over Oil and ANWR The political saga around whether to drill for oil in the Arctic National Wildlife Refuge is one of tricky legislative maneuvers, late-night votes and passionate lobbying.

Listen
For 30 Years, a Political Battle Over Oil and ANWR 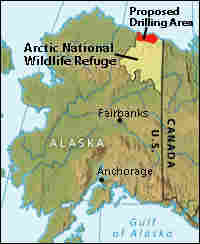 The area of concern before Congress is a 1.5 million-acre strip on the northeastern tip of the range, known as area 1002. It has not been designated wilderness, leaving it open to the possibility of oil drilling. Melody Kokoszka, NPR hide caption 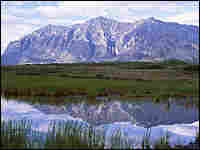 In 1980, 8 million acres in northern Alaska were set aside and protected as wilderness. At issue is a section of the refuge's coastal plain, which is considered by some to be rich in oil. Gavriel Jecan/Corbis hide caption

"Somewhere in some archive are my field notebooks describing all the geological rock sections, which of course indicated very clearly even then that the potential for large accumulations of oil were there," Herrera said.

A decade later, that potential created the first of many stalemates over the Arctic refuge on Capitol Hill. Congress was considering an Alaska lands bill that would determine which parts of the state should be set aside as parks and wilderness and which should be developed.

"So the debate started way back in 1977, I think that was the first time I came to Congress and testified on that issue," Herrera recalled.

At that time, Stan Senner was a young environmentalist from Fairbanks, Alaska. He flew to Washington to lobby for protection of the coastal plain, a wilderness teeming with wildlife in northeastern Alaska.

"We knew right from the outset that it was going to be a big fight," Senner recalled.

He remembered that environmentalist members of Congress were determined to stall the bill until it protected the refuge's coastal plain. They succeeded in the House, but not in the Senate. Then President Jimmy Carter, who supported preservation, lost his re-election bid to Ronald Reagan, and environmentalists like Stan Senner were worried.

"There was this enormous pressure to settle for whatever we had to settle for to get the larger Alaska Lands Act taken care of, " Senner said.

What they settled for was limbo for the coastal plain. Congress asked the Interior Department to research the possibility of oil development, and it reserved for itself the power to decide whether to open it to drilling in the future.

"The Arctic refuge issue was unresolved. Everyone just punted to future sessions of Congress," he added.

That was the beginning of a wrestling match in Congress over the fate of the Arctic National Wildlife Refuge that has stretched more than three decades. It has been full of tricky legislative maneuvers, late-night votes and passionate lobbying efforts by both sides.

In 1987, when Reagan was still president, the Interior Department recommended that Congress allow drilling in the coastal plain of the Arctic refuge. It reported that the area represented the nation's best chance to boost domestic oil production. But it also cautioned that drilling could harm wildlife, especially the caribou herds that use the area as a calving ground.

That report sparked the first in a series of efforts to open the refuge. In March 1989, a Senate committee approved leasing in the coastal plain.

"And less than 10 days later, the Exxon Valdez oil spill happened, and whatever momentum there was behind that Arctic drilling provision in the Senate, the air simply got let out of the balloon immediately after the Exxon Valdez hit the rocks," Senner said.

More than 10 million gallons of crude oil poured into Prince William Sound. Loons, harbor seals, pigeon guillemots and other wildlife were devastated by the spill.

Herrera also remembered the day the Exxon Valdez ran aground as a pivotal moment in the effort to allow drilling in the Arctic National Wildlife Refuge.

"This was a worst-case scenario which had come to fruition, and clearly people were going to pause rather than continue with their somewhat reluctant but nevertheless positive support for opening up ANWR. That's how it was proceeding at that time but it came to a crashing end," said Herrera, who retired from British Petroleum in 1993.

"Then-Sen. Frank Murkowski offered an amendment at midnight to the defense appropriations bill that would have allowed the opening of the Arctic refuge, and the Senate approved that amendment on a voice vote," Senner said.

Pressure from both parties killed the provision before it reached the president. But Murkowski and other oil industry supporters in Congress kept trying.

Throughout this whole time, Oliver Leavitt was lobbying in favor of drilling. "We couldn't get it passed in the Senate for a long time because of the threat of a filibuster; you need 60 votes to break the filibuster," recalled Leavitt, chairman of the board of directors of the Arctic Slope Regional Corporation, which represents some of the native Inupiat people in northern Alaska.

When Republicans took charge of both the House and the Senate in the mid-1990s, they put the measure in the budget package, which can't be filibustered.

"We thought we had it passed back in 1995. It went through both the House and the Senate, and of course President Clinton vetoed it," Leavitt added.

A new president removed that obstacle. President Bush supports drilling. But repeated efforts failed to give him an energy bill to sign that included drilling in the refuge. Senate filibusters, or the threat of them, stood in the way.

But now the measure is again part of a budget process, which can't be filibustered. The Senate approved a budget package that includes a provision to allow leasing in the refuge.

This time, the House is presenting the hurdle. More than two dozen moderate Republicans oppose drilling in the Arctic, and they pressured their leadership to remove the measure from the House budget package, which had yet to face a vote in Congress.

Nonetheless, Herrera says, with energy prices up, this is the best chance yet for success.

"Logic in the end has to prevail," Herrera said. "This country is great because of its use of energy, and domestic energy is much more valuable to us economically in all regards than imported energy."

Senner agreed that these are perilous times for his side. But he said he can't imagine Congress would give up the last pristine slice of Arctic wilderness in America.

"We have the chance in my lifetime of seeing the infrastructure of the oil industry spanning the entire Arctic coast, and that would be a tragedy," Senner said.

Neither man believes the long battle is over. Both said they believe there will be more surprises along the way.