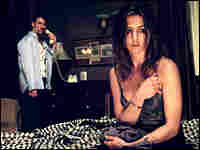 Well, the weekend is almost upon us. That means it's time for our weekly digest of what film critics are saying about the new movie releases, compiled by the online magazine Slate. Here's Mark Jordan Legan with Summary Judgment.

First up in wide release, we have the thriller "Derailed." Jennifer Aniston and Clive Owen star as two strangers who meet at a train station, have an affair, and then everything goes wrong.

Unidentified Man #1: You own a gun, Mr. Schine?

Unidentified Man #1: No, of course not. So where were you last night?

LEGAN: The nation's critics agree with the title and feel this plot has run off the tracks. More than a few used the term `preposterous' to describe the ending, and many feel the two leads are miscast. `Drawn out, clunky and uneasily acted,' complains USA Today. The LA Times warns, `A silly, lurid, pulpy thriller that's not nearly lurid and pulpy enough to be much fun, but more than silly enough to be ludicrous.' And The Dallas Morning News sort of kind of compliments it with, `"Derailed" is entertaining, but you'll always be several steps ahead of it.'

Next up is the autobiographical drama "Get Rich or Die Tryin'." A young Donald Trump is born in the ghetto and--no, wait, that's not it. Music superstar Curtis "50 Cent" Jackson stars in this gritty story of an orphaned street kid who makes his mark in the dangerous drug trade before trying to make a name for himself in the world of hip-hop.

(Soundbite of "Get Rich or Die Tryin'")

Unidentified Woman: So what do you do?

Unidentified Woman: No, really, what do you do?

Unidentified Woman: Seriously, Marcus, what do you do?

Unidentified Man #2: Marcus is a gangsta. He's rapping their ears.

LEGAN: Most of the critics feel the rags-to-riches story is too familiar, and many find 50 Cent's acting a bit--well, you tell him! Even though the Chicago Sun-Times says `"Get Rich or Die Tryin'" is a film with a rich and convincing texture, a drama with power and anger,' many agree with the New York Post, which warns, `The charismatic rapper is so utterly inexpressive as an actor that he's constantly getting swallowed up by his own movie.'

And we close with the wide-release family adventure "Zathura." Based on the children's book by Chris Van Allsburg, who also wrote "Jumanji" and "The Polar Express," this fantasy tale is about two bickering brothers who are propelled into deepest, darkest space after playing a game they found in the basement. Well, we all know there's only one game that can really do that, and it's Yahtzee!

Unidentified Boy: Walter, I think he's talking about you.

LEGAN: The critics loved going along on this wild ride. Entertainment Weekly shouts, `A rarity, a stellar fantasy that faces down childhood anxieties with feet-on-the-ground maturity.' The Hollywood Reporter cheers that `Director John Favreau again delivers that rare beast, a family film that even childless adults can enjoy.' And The Miami Herald zooms, `A wild buckle-up-and-blast-off adventure.'

Wow! If this board game romp does well, you know what can't be too far behind. That's right: "Candyland: The Movie."

BRAND: And DAY TO DAY is a production of NPR News with contributions from slate.com. I'm Madeleine Brand.