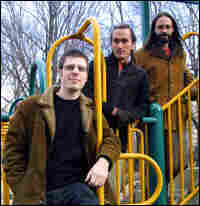 Listen to cuts from the new album:

Just over a decade ago, renegade composer and saxophonist John Zorn set out to redefine Jewish music with an ambitious set of pieces he called the "Masada Songbook."

Composer and saxophonist John Zorn has pushed back the boundaries of Jewish music with everything from klezmer music to hard rock. Corbis hide caption

There are now over 200 pieces in the catalog, which take their inspiration from klezmer, Middle Eastern and classical music.

In his original group, John Zorn played saxophone alongside a trumpeter, bass player and drummer. But the catalog was designed to be played by any group of instruments, and Zorn's discography has since expanded to include renditions by klezmer bands, jazz combos and vocalists.

Zorn and Madof recently spoke with host Liane Hansen about their work and the continuing evolution of Jewish music.