Accessibility links
Finding Prosperity by Feeding Monkeys Forget the cake and presents. Listener Harold Taw has his own unique birthday tradition -- one prescribed by a Burmese monk. By faithfully following it, Taw believes he's helped his family to prosper.

When I was born, a blind, Buddhist monk living alone in the Burmese jungle predicted that my birth would bring great prosperity to the family. To ensure this prosperity, I was to feed monkeys on my birthday. 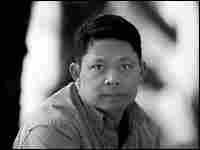 Trained as an attorney, Harold Taw is taking a break from legal work to complete his first novel, Adventures of the Karaoke King. He and his wife live in Seattle where Harold has special arrangements with a local zoo to feed their Goeldi's monkey on his birthday this year.

While this sounds superstitious, the practice makes karmic sense. On a day normally given over to narcissism, I must consider my family and give nourishment to another living creature. The monk never meant for the ritual to be a burden. In the Burmese jungle, monkeys are as common as pigeons. He probably had to shoo them away from his sticky rice and mangoes. It was only in America that feeding monkeys meant violating the rules.

As a kid, I thought that was cool. I learned English through watching bad television shows and I felt like Caine from Kung Fu, except I was the chosen warrior sent to defend my family. Dad and I would go to the zoo early in the morning, just the two of us. When the coast was clear, I would throw my contraband peanuts to the monkeys.

I never had to explain myself until my 18th birthday. It was the first year I didn't go with my father. I went with my friends and arrived 10 minutes after the zoo gates closed.

"Please," I beseeched the zookeeper, "I feed monkeys for my family, not for me. Can't you make an exception?"

If only it were so easy. That time, I got lucky. I found out that a high school classmate trained the monkeys for the movie Out of Africa, so he allowed me to feed his monkey. I've had other close calls. Once a man with a pet monkey suspected that my story was a ploy -- that I was an animal rights activist out to liberate his monkey. Another time, a zoo told me that outsiders could not feed their monkeys without violating the zookeepers' collective bargaining agreement. In a pet store once, I managed to feed a marmoset being kept in a birdcage. Another time, I was asked to wear a biohazard suit to feed a laboratory monkey.

It's rarely easy and, yet, somehow I've found a way to feed a monkey every year since I was born.

Our family has prospered in America. I believe that I have ensured this prosperity by observing our family ritual and feeding monkeys on my birthday. Do I believe that literally? Maybe. But I have faith in our family and I believe in honoring that faith in anyway I can.