Accessibility links
Tomato Farmers Caught Out in Insurance Scam A small number of corrupt farmers and insurance agents are scamming the nation's crop insurance system. They're staging crop damage and filing phony claims, to the tune of $160 million last year. Using a bag of cocktail ice and a camera, one tomato-farming couple took the government for millions of dollars. 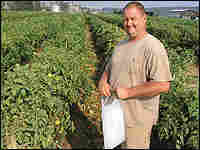 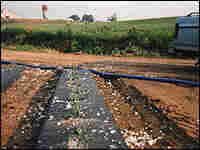 Scene of the Crime: The Warrens used pictures like this, of ice-covered tomato fields, as part of their scheme to defraud the government out of millions of dollars. Courtesy USDA hide caption 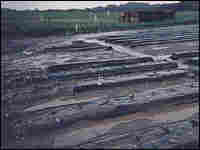 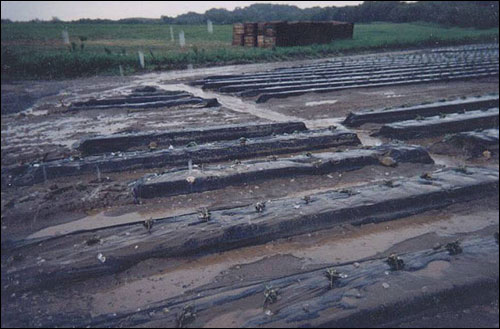 After Chambers threw ice on the tomato crop, a worker beat the plants. 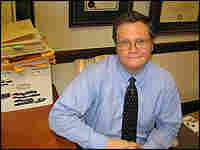 A wheatfield in Georgia, a soybean field in Iowa, a cotton crop in West Texas, a tomato farm in Tennessee: These are crime scenes.

Charges Against the Warrens

The felons are a small group of farmers who falsely claim that weather ruined their crops so they can collect the insurance. The U.S. Department of Agriculture says they cheated the U.S. Treasury and insurance companies out of $160 million last year. An NPR investigation reveals this crime is growing in size and complexity, while some insurance companies look the other way.

Interviews with 50 individuals in eight states -- investigators, prosecutors, farmers, watchdogs and government regulators -- reveal a culture of cheating that has grown up among a small group of farmers who exploit the nation's government-backed crop insurance program. The program was tailor-made for fraud.

To understand how it's done, come down to the fertile valleys on the border of North Carolina and Tennessee, where the federal government has just wrapped up the largest case of crop insurance fraud ever uncovered.

According to Gretchen Shappert, U.S. attorney for the western district of North Carolina, "the Warren Farms investigation is literally the mother of all crop fraud investigations. It was a result of a perfect storm of individuals who were involved in fraud."

Robert and Viki Warren are among eight people who pleaded guilty to swindling the government and insurance companies out of more than $9 million in bogus insurance claims from 1997 to 2003. The Warrens were among the largest tomato growers east of the Mississippi; at one point they owned 26 farms in three states, including one run by Bobby Chambers.

"We grow different kinds of produce, tomatoes, green beans, cucumbers, just a little of everything," says Chambers, a beefy, baby-faced, 42-year-old lifelong farmer who runs a spread that borders the Nolichucky River in Cocke County, Tennessee.

According to trial records, he helped the Warrens stage a hailstorm to make it look like their tomatoes had been destroyed, so they could collect the insurance money.

Chambers says he bought a bag of cocktail ice and a disposable camera, and, on his boss's order, created a foul-weather tableau. "The way we did it, we was down taking pictures, out this row, and then we just stood behind it and throwed the ice over the top. To me, it looked like a hailstorm," says Chambers.

To complete the scene of devastation, they then picked up wooden tomato stakes and attacked the unsuspecting vegetables. "They had one Mexican who did all the beating, he beat every 16,000 of them. He'd just go through there and knock the leaves off of them," says Chambers, as he illustrates the activity with a long stick. "It made it look like where the hail had beat it up."

To understand the crime, you've got to know who the players are.

The farmer buys an insurance policy that provides partial coverage -- usually 50 to 60 percent -- for the crop he expects to raise.

The loss adjustor is dispatched to inspect the field if the farmer claims a disaster.

If the disaster is confirmed, the crop insurance company sends the farmer a check.

And the U.S. Treasury, which guarantees the riskiest farm insurance, often reimburses the insurance company.

And there's one more player: the federal prosecutor. In this case, Richard Edwards was the prosecutor who blew the whistle on the farmers, the agent and the adjustor.

"The thing that was so interesting to us about this case was all of the classic methods -- and the mind of man knows no limits in ingenuity to commit crime --seemed to show up in one case," Edwards says.

The fake weather disaster was poorly executed. There was scant evidence 1.5 million tomato plants had ever been planted, as the Warrens claimed. But Edwards says when the loss adjustor came out he approved it anyway.

"Bobby Chambers' testimony was that it was a 'drive-by adjusting,' that they were only there a few minutes, and looked like they didn't want to get their shoes dirty."

Even the USDA was unwittingly complicit in the scheme.

The government is so generous with crop insurance that it subsidizes farmers' premiums. Edwards says the USDA paid the Warrens more than $2 million to help them insure their tomatoes. He compares it to the following hypothetical situation: "Every year a bank gets robbed and they notice the bank robber is using an old getaway car and they ask, 'Would you like a car loan to have a nicer getaway car next year when you come to rob us?' Because the government is subsidizing the farmer's ability to defraud us for the coming season."

Bobby Chambers testified for the government and got two years probation for his role in the scheme. The adjustor and the insurance agent have been convicted, but not yet sentenced. Robert and Vicki Warren each received some six years in federal prison.

Sean Devereaux, the attorney for Robert Warren, says that while his client admitted guilt, it's the whole system that's corrupt. "It's fine for the government to issue sentencing memoranda and make Robert Warren appear to be the Saddam Hussein of crop insurance, but he's not," Devereaux says.

"He basically was approached by people selling insurance and told, 'This is an easy thing to do. Don’t worry, this is the government's money, it's not the insurance company's money.' "

The federal indictment, in fact, states that the Virginia-based insurance agent coached the Warrens, in detail, about how to perpetrate the fraud. What's more, the adjustor testified that his supervisor at the insurance company -- Fireman's Fund Agri-Business, one of the largest in the country -- instructed him to lie on crop-damage forms for the Warrens.

A spokesman for Fireman's Fund said neither the adjustor nor his supervisor work for the company anymore.

According to Michael Hand, who is in charge of compliance at the Risk Management Agency, the federal agency that administers crop insurance, "Anytime you have cases like the Warrens, that's something that was out of control and never should have happened ... Unfortunately, I have a number of cases like that, active and settled, at this point, that exceed a million dollars."

Prosecutor Edwards didn't know anything about the obscure world of crop insurance before he worked on the Warren case. Now he's something of an expert, and he says he's surprised at how easy it is to flimflam the program. "The American taxpayer is getting defrauded out of millions and millions and millions of dollars. The Warrens are in no way unique," he says.

Everyone interviewed for this series agreed that the overwhelming majority of the 788,000 American farmers who buy crop insurance are honest. USDA officials estimate about 5 percent of indemnities paid out each year go to phony claims, about the same proportion found in other types of insurance.

What's different in this case is that crooks are increasingly brazen, according to the USDA Inspector General's Office; the money they're stealing usually comes out of the U.S. Treasury -- and powerful political forces have resisted reform.