Accessibility links
Techie Immigrants Make 'Curry Rock' Over the past decade, hundreds of thousands of foreign-born high-tech workers have come to the United States thanks to the H-1B visa guest worker program. A new album mixes Indian and Western musical influences to take a lighthearted look at the techie immigrant's life in America.

Hundreds of thousands of high-tech workers have made the trip from India to the United States over the past decade. Many have come on an H-1B visa, a guest worker program for highly skilled foreigners. 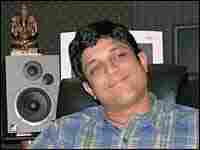 Software engineer Srikanth Devarajan merged his computer skills with a longtime passion for music to produce H1Bees, an album about the life of H-1B visa holders in the United States. Tracy Wahl, NPR hide caption

That's how Indian software programmer Srikanth Devarajan made his way to America a decade ago. He says that back home, many people consider H-1B visa holders like him to be pampered and privileged. But the reality of being a stranger in a strange land can often be lonely, nerve-wracking and confusing.

Devarajan chronicles the immigrant experience in the United States in a new album, H1Bees. Sung in English, Tamil and Hindi, its seven tracks reflect a mix of Indian and Western musical styles. The result is what he calls "curry rock," a name he's trademarked.

Devarajan composed and produced the album in his basement studio in suburban Maryland. The recording also features the music and voices of several other local Indian immigrants with a musical bent whom he recruited for the project.