Accessibility links
Wild Things Thanksgiving If there was a turkey on the first Thanksgiving table -- and it's not clear there was --- it was a wild turkey, a very distant relative of that bird in the supermarket case today. Food essayist Bonny Wolf suggests going wild this Thanksgiving, with wild mushroom soup, wild rice stuffing, and yes, a wild turkey. 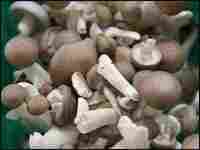 Cook up a wild Thanksgiving, with mushroom soup, wild rice stuffing and even a wild turkey. Recipes below. David Deutsch hide caption

Thanksgiving has changed since 1621.

At the so-called first Thanksgiving, there would have been no sweet potatoes, cranberry sauce or pumpkin pie. It's not even clear there was a turkey on the table.

All we really know about the food at that first harvest celebration comes from the pen of colonist Edward Winslow, who wrote that the Wampanoag Indians "went out and killed five deer" and that the governor sent "four men fowling."

So we know they had venison, and they likely had some kind of water fowl -- goose, duck, swan or eagle. (Best not to think about those last two.) The fowl also could have been wild turkey, but if so, it was a very distant relative of that bird in the supermarket case today.

Turkeys have had most of the wildness bred out of them. In the quest for more white meat, they have been "genetically improved" with abnormally large breasts. They are so top heavy and so fat they can't get off the ground.

Wild turkeys, however, run and fly so they're quite lean. The wild birds are smaller, firmer, and have a rich, intense flavor since they are mostly dark meat. They are expensive (about $7 a pound) and far less meaty than commercial birds, but they are delicious.

Around the holidays, some specialty markets carry wild turkeys or they can be ordered from game bird suppliers. You'll get farm-raised turkeys from these sources. You have to be a hunter to get a real wild one.

Wild birds can be stuffed and cooked like any other turkey, but you have to take more care not to overcook them or dry them out since they have no extra fat. Barding with bacon is often recommended.

American Game Cooking by John Ash and Sid Goldstein recommends 12-14 minutes a pound for a whole wild turkey cooked at 325 degrees. Internal temperature should be 150-160 degrees when the bird comes out of the oven. The bird should then be left to rest under foil for 15-30 minutes before carving so the meat can absorb the juices.

Ash and Goldstein also caution that carving a wild turkey is different from carving a domestic bird. The meat has the texture of steak more than of fowl.

If you decide to go wild here, why not add the produce of the forest floor to the Thanksgiving table? Foragers have been out gathering wild mushrooms to bring to many markets or farmers markets. There is also a variety of dried wild mushrooms available that can be reconstituted in wine or water. A cup of wild mushroom soup would make a good start to the holiday meal. Or, mix them into your stuffing.

Since I'm from Minnesota, I stuff my turkey with, yes, wild rice -- the state grain. The Chippewa (Ojibway) Indians have been handpicking wild rice in northern Minnesota waters for centuries.

The state takes the gathering of wild rice so seriously it's regulated -- like hunting. There's an opening day for the season, you need a license and have to gather the rice in the traditional Indian manner. That is, two people go out in a canoe. One poles the boat through the shallow lake beds while the other beats the rice stalks with government-approved sticks.

Harvesting wild rice, really an aquatic grass unrelated to rice, is so labor-intensive and the rice so fragile that it's expensive outside Minnesota. There is, however, plenty of cultivated, less-expensive wild rice available.

We have many more options for Thanksgiving than the pilgrims did. We can just go wild.

This rich, earthy soup makes a good Thanksgiving first course. It uses dried wild mushrooms (I used a bag of mixed wild mushrooms from Trader Joe's) and fresh mushrooms. You can use any kind of fresh fungi you like, even button if more exotic mushrooms are hard to find or too expensive. This recipe is adapted from The Silver Palate Cookbook by Julee Rosso and Sheila Lukins (Workman Publishing, 1979)

2 ounces cepes, morels or chanterelles (or other wild mushrooms)

2 cups finely chopped yellow onions (or use half leeks)

Rinse the dried mushrooms well in a sieve under cold running water and soak them in the Madeira for 1 hour, stirring occasionally.

Melt the butter in a soup pot. Add the onions and cook, covered, over low heat until they are tender and lightly colored, about 15 minutes, stirring occasionally.

Trim stems from the fresh mushrooms. Wipe caps with a damp cloth or mushroom brush and slice thin. (Mushrooms absorb water like sponges so you don't want to soak them or rinse them. Instead, use a soft mushroom brush (available in kitchenware stores) or a damp cloth to wipe them off.) Add to the soup pot, season to taste with salt and pepper, and cook over low heat, uncovered, stirring frequently, for 15 minutes.

Carefully lift dried mushrooms from bowl they're soaking in with a slotted spoon and transfer to soup pot. Let Madeira settle a moment and then pour carefully into soup pot, leaving sediment behind. (Or you can pour through a strainer.)

Add the chicken stock and bring to a boil. Reduce heat, cover and simmer for 45 minutes, or until dried mushrooms are very tender.

Strain the soup and transfer the solids to the bowl of a food processor fitted with a steel blade. Add 1 cup of the liquid and puree until very smooth.

Return puree to the soup pot along with remaining liquid and set over medium heat. Taste, correct seasoning, and thin the soup slightly with heavy cream if it seems too thick. Heat until steaming and serve immediately.

This is my son's favorite part of Thanksgiving. I usually double or triple the recipe so he has enough for days of leftovers. One year I cut back on the butter and was immediately called on it.

Place the rice in a colander and wash well under cold running water. Drain well.

Cook the onions in the butter stirring until wilted. Add the parsley and rice. Continue stirring and cooking about 5 minutes then add the broth and, if desired, salt and pepper. Bring to a boil, cover and cook over low heat until rice is tender, 30-40 minutes.

Stuff inside the bird and/or:

Place in a buttered casserole and bake covered at 350 degrees 35-40 minutes. Remove cover, baste with turkey juices and bake another 15 minutes.