Accessibility links
A Fraternity Hazing Gone Wrong In February, 21-year-old Matthew Carrington collapsed in a frat house basement at Chico State University, dying several hours later. Five of his fellow students pleaded guilty in his death; one will serve a year in jail. Carrington's parents are among those who want penalties for hazing toughened. 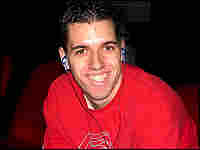 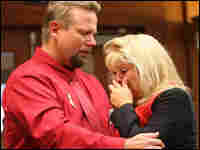 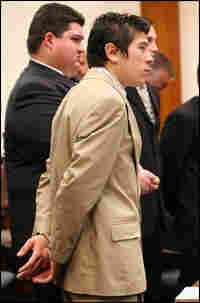 Even before Carrington's death, Chi Tau was considered a rogue fraternity. The chapter had been suspended at Chico State University. The premises have since been closed. Elaine Korry, NPR hide caption 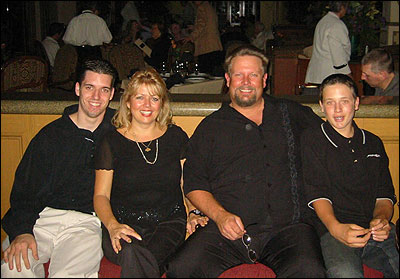 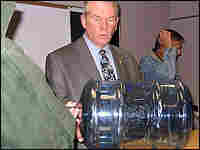 District Attorney Mike Ramsey shows reporters the type of water jug from which Carrington was forced to drink. Carrington died of water intoxication, a condition in which the brain and lungs swell. Elaine Korry, NPR hide caption

It's a parent's nightmare and a nagging fear for the people who run colleges and universities: A young fraternity pledge dies when hazing gets out of control. It's happened at least once each year for more than three decades. Nine months ago it happened at Chico State University in California, and this time prosecutors did something unusual: They filed felony criminal charges against the fraternity brothers involved.

But that's not much comfort to the family of Matthew Carrington, who died during the Feb. 2, 2005, hazing accident.

In his 22 years, Gabriel Maestretti has often been a role model: an altar boy, high school homecoming king and a volunteer coach. But in the past year he's also been called a "tormentor" and "a mean drunk." And earlier this month, he became something worse: a felon.

The Butte County courtroom of Judge Stephen Benson was awash in red, the color worn by family and friends of Matthew Carrington to honor him. Gabriel Maestretti, deeply religious as a boy, had never been in trouble before. Yet, according to the district attorney, he was the most culpable in Carrington's death. He stood before the judge, baby-faced, with the physique of a linebacker, choking back tears.

"I did what I did out of a misguided sense of building brotherhood, and instead I lost a brother. I will live with the consequences of hazing for the rest of my life," Maestretti told the court. "My actions killed a good person, and I will be a felon for the rest of my life, and I'll have to live with that disability, but I'm alive and Matt's not. "

Moments later, Maestretti and three of his fraternity brothers -- John Fickes, 20, Carlos Abrille, 22, and Jerry Lim, 25 -- were handcuffed and led off to jail.

Matthew Carrington would have turned 22 this month. He grew up with his younger brother in a small ranch-style house in Pleasant Hill, east of San Francisco. Debbie Smith has a giant portrait of her son on the fireplace mantle. Dozens of snapshots fill the coffee table and bookshelves.

"We did everything together as a family, so we have tons of pictures, and I have to have them out," she said. "I have this need to just be surrounded by him. I can't put him away."

Like a lot of moms, Debbie Smith says her son was destined for great things. But Carrington's plans weren't grandiose at all. He just wanted to graduate and get a good job, marry and have kids, his mother says. Now, she mourns the wedding she'll never attend, the grandchildren she'll never hold.

Boarded-up on the edge of campus is the Chi Tau fraternity house. From the outside, the white building doesn't look like a crime scene. The basement, says Chico Police detective Greg Keeney, the lead investigator on the case, is another story.

"It's kind of like the medieval castle dungeon," says Keeney. In February, at the time of Carrington's death, the dark and dirty basement would have been very cold, says Keeney. Repeatedly scribbled on the walls was the phrase, "In the basement, no one can hear you scream."

Carrington died during Chi Tau's "Hell Week." Junior fraternity brothers were in charge and were told to be tough on the pledges. Carrington was at the Chi Tau, located in Chico, Calif., north of Sacramento to support his friend, Mike Quintana. Both were sober, according to police reports.

The two pledges were ordered downstairs and told to do calisthenics in raw sewage that had leaked on the floor. For hours, according to district attorney Mike Ramsey, they were interrogated and taunted.

There were forced pushups and trivia quizzes. Through it all, the Carrington and Quintana were ordered to drink from a five-gallon jug of water, which was filled over and over. Fans blasted icy air on their wet bodies. They urinated and vomited on themselves. Then, according to DA Ramsey, something went terribly wrong.

Carrington collapsed and started a seizure. Fraternity members didn't initially call an ambulance. By the time they did, it was too late. Carrington was taken to Enloe Medical Center, where his heart stopped. At about 5 a.m. he was pronounced dead from water intoxication, which caused the swelling of his brain and lungs. Not a single fraternity brother was there, a fact that still haunts his mother.

"All I could think of was, 'Matt's alone. Nobody is with him... why is that?' " she said. Hours passed from the hospital's first call to Carrington's parents before they learned how he died.

Hazing is illegal in the majority of states, including California. But usually it's a misdemeanor offense that brings a slap on the wrist. Most colleges have banned hazing, and rogue Greek chapters have been suspended. But sometimes the strategy backfires. Hazing expert Hank Nuwer says once they're decertified, these chapters are accountable to no one.

"It's kind of like having unregulated gangs on campus, and yet it's a hidden problem that doesn't get discussed on the news a lot," says Nuwer.

It was a problem at Chico State. Chi Tau was among a handful of suspended fraternities that had been in trouble before. For now, the school has shut down all Greek recruitment. A task force is overhauling all the rules for student conduct. And University President Paul Zingg has threatened the ultimate punishment -- an outright ban on fraternities and sororities.

"They talk about integrity and scholarship and holy friendship forever," says Zingg. "And I basically said, if that's really what you believe in, you've got a respected place on this campus. But if you're nothing but drinking clubs masquerading as fraternities, you don't."

Fraternity members pass the now-defunct Chi Tau house everyday on their way to classes. It's a vivid reminder of Carrington's death.

"We're still dealing with it. Everybody's still kind of haunted by it," says Adam Cherry, a Chico State junior and a member of Sigma Pi, a fraternity which he says doesn't haze. He thinks it's only right that the defendants are in jail. But he resents being lumped together with the young men implicated in Carrington's death.

There's a growing movement to toughen the penalties for hazing. Two states, New York and Florida, have done it already, and Carrington's parents say now it should be California's turn. They want hazing out of the education code and charged under the penal code, like other violent crimes. But even that's not enough, says Debbie Smith. Something else has to change: the mindset that considers hazing just part of college life.

It may be too late for Gabriel Maestretti, who will serve one year in jail. But he, too, wants to get the message out.

"I accept my punishment, with the hope that it will serve as a warning to others not to follow the path I did," he said during his sentencing. "Hazing isn't funny, it's not cute. It's stupid, dangerous. It's not about brotherhood, it's about power and control."

For other students, the message hasn't sunk in yet. Despite the trauma of Carrington's death, two more Greek organizations at Chico State have already been suspended for misconduct this semester.