Accessibility links
Crop Insurance Program Ripe for Fraud Federal crop insurance was created in the dust bowl days of the 1930s to help farmers survive the ravages of nature. But changes in the program have created a new type of farmer: one who farms only for the insurance money. 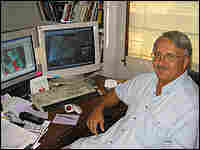 Federal crop insurance was created in the dust bowl days of the 1930s to help farmers survive the ravages of nature: drought, hail, flood, freeze, insects, disease. Because agriculture is so inherently risky, the U.S. Department of Agriculture decided to take on the job of insuring crops.

Robert and Viki Warren claimed millions for ruined tomatoes; Wendell Mints was given $500,000 for a bogus cotton crop. A look at their crimes, and how they were caught. Nov. 14, 2005

Then in the mid-1990s, Congress privatized the program.

The federal treasury still guaranteed the riskiest policies, but the government turned the selling and servicing of policies over to private insurance companies.

The program exploded in size. The value of insured crops jumped from $10 billion to $40 billion, as dozens of new specialty crops became eligible, from blueberries to sunflowers to lemon grass.

A congressional mandate, and the insurance industry, helped drive that growth.

"There would not have been an expansion of the program without industry lobbying for new legislation, more budget authority, more subsidies for the program," says John Zirschy, who served as associate administrator of the Risk Management Agency, the USDA agency in charge of crop insurance, from 1998 to 2001. "The thing that seemed the most egregious was the extent to which the industry ran the program. The industry has a lot of influence and is also a major donor to the political process."

According to campaign finance reports, over the past six years political action committees of the crop insurance industry -- such as Rain & Hail PAC, and the American Association of Crop Insurers PAC -- have donated more than $900,000 to national political campaigns. The top three recipients were men who served on agriculture committees and wielded great power over the program in question: Rep. Henry Bonilla (R-Texas), former Rep. Charlie Stenholm (D-Texas), and Sen. Ben Nelson (D-Nebraska).

The industry claims the crop insurance business is expensive to run, and after overhead is paid, their rate of profit is a modest 8 to 10 percent.

Yet even as the agriculture insurance field was growing, John Zirschy says the companies resisted a commensurate compliance program. "It wasn't like they wanted to look the other way, they didn't want anyone looking. They actively tried to prevent us from going out finding criminals," he says. "They don't want somebody else finding out their agents were colluding with the farmer. There are cases where the insurance agents were part of the fraud."

As a result of the spotty oversight, the program became a magnet for farmers looking to scam the system. According to John Brown, an agricultural investigator based in Columbia, Mo., there's even a name for them: insurance farmers. "They just farm for crop insurance," Brown says. "I want you to know that. That's how they exist. They have no intentions of harvesting a crop. In many cases, they don't even plant a crop. They don't even plow the soil sometimes. And they get away with it."

Brown has testified as an expert witness in 26 civil and criminal cases. One of them was in Nolan County, Texas, where five farmers were convicted in 2001 of an insurance scheme to defraud the USDA out of more than $1 million.

Farmer Mike Massey filed a claim on cotton he never planted. He was convicted of fraud and served a year in the Fort Worth federal penitentiary. "We did have our little card games every once in awhile," says Massey, describing his time in prison. "There'd be me, and probably six drug dealers sitting across the room. My nickname was Cotton in there. They wondered, 'Why in the hell were you in there for cotton?' "

Massey sits in his lawyer’s office in the town of Sweetwater, just west of Abilene, his black hat and boots still dusty from working cattle that morning. "At one point you go from trying to make a crop, to maximizing the dollars you make from the insurance. Not to make a crop at all is the best scenario, either planting substandard seed, plowing too deep, planting too shallow. I mean, if you don't want it to come up, you can pretty well make it to where it won't come up."

The chances of getting caught are still slim. The USDA's Risk Management Agency has 100 employees to monitor 2 million policies nationwide. So the government depends, as its first line of defense against fraudulent claims, on the 17 companies that sell crop insurance. Some aggressively pursue suspicious farmers, but some observers say the industry as a whole has little self-interest in policing itself.

According to Dennis Jay, director of the Coalition Against Insurance Fraud, a national industry watchdog, "When somebody files a false insurance claim on your automobile insurance, that money comes directly off the bottom line, off the profit of an insurance company. They have a tremendous incentive to root out fraud. In the crop insurance program, it doesn't always work like that because it's the federal government that's paying the claims for the most part."

Not so, says Bob Parkerson, president of National Crop Insurance Services, a trade group based in Kansas City. "There'll always be people interested in getting a quick dollar. And we're working diligently to find those people."

Parkerson points out that the USDA is requiring insurance companies to take on more and more risk, so it's not just taxpayer money they're paying out. Second, he denies Zirschy's charge that the companies obstructed efforts to crack down on fraud. "They're very interested in maintaining the appropriate levels of checks and counterchecks in the business because a good deal of their money is on the line, and they're willing to pay a farmer if he does have a legitimate loss, and they're willing to fight that farmer if he has tried to commit fraud and take the money away from them."

The Government Accountability Office released the results of an investigation two weeks ago faulting the RMA and the industry for not doing more to root out fraud. It's the third such GAO report in eight years. Sen. Susan Collins, the Maine Republican who ordered the GAO investigation, has asked the agriculture secretary to impose stricter controls.

Those changes have already begun. The honor system is out, and the agriculture department is taking on a new role -- farm cops.