Accessibility links
Bush Aggressively Defends Iraq War With public support for his handling of the Iraq war waning and Democrats on the attack, President Bush has been defending himself more aggressively. Monday, in a speech at an Air Force base in Alaska, the president said that Iraq under Saddam Hussein was a threat that needed to be confronted.

With public support for his handling of the Iraq war waning and Democrats on the attack, President Bush has been defending himself more aggressively. Monday, in a speech at an Air Force base in Alaska, the president said that Iraq under Saddam Hussein was a threat that needed to be confronted. 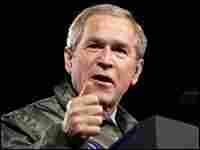 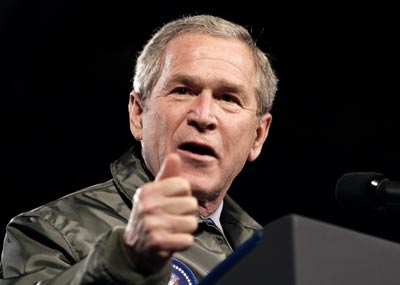 President Bush speaks to troops at Elmendorf Air Force Base in Anchorage, Alaska, on a stop en route to Asia, Nov. 14, 2005.

And as the secretary of State travels in the Middle East, President Bush is in Japan. He's on a weeklong tour of Asia which also includes a summit of Pacific Rim. Yesterday, the president was in Alaska and delivered a speech in an air base which sent a message to his critics. NPR White House correspondent Don Gonyea reports.

A new poll in Newsweek magazine shows that Americans by 2:1 now disapprove of the way the president is handling the war in Iraq. Mr. Bush has begun defending that handling more aggressively. He did so last Friday when he spoke before a military audience in Pennsylvania on Veterans Day and again yesterday in a speech to soldiers at Elmendorf Air Force Base in Alaska.

President GEORGE W. BUSH: The outcome of this war will affect every single American and that makes it a subject of vital debate, and it's important to be clear about the facts.

GONYEA: He said that after the 9/11 terrorist attacks, there was bipartisan agreement in the US Congress that threats needed to be confronted before they fully materialized. The president said that Iraq under Saddam Hussein was just such a threat. In Alaska yesterday, he cited the prewar words of unnamed Senate Democrats.

GONYEA: Democrats have more recently argued that the president distorted that threat through selective use of intelligence presented to members of Congress, prompting the kind of statements of support he know cites. In his Alaska speech, the president responded.

Pres. BUSH: Only one person manipulated evidence and misled the world. And that person was Saddam Hussein.

GONYEA: The president knows he has an uphill battle in winning back public support for the war, but for the rest of this week, he will be turning his attention to diplomacy, trying to shrink US trade imbalances with Japan and China at the same time he tries to reduce tensions between those two nations. Don Gonyea, NPR News, Washington.