Accessibility links
Report Faults Ex-CPB Chair Tomlinson on Ethics Former Corporation for Public Broadcasting chairman Kenneth Tomlinson violated his office's code of ethics as he sought to bring political change to the organization, according to the agency's internal investigation. 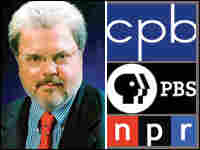 Former Corporation for Public Broadcasting chairman Kenneth Tomlinson violated his office's code of ethics as he sought to bring political change to the organization, according to the agency's internal investigation.

The CPB's Report on Tomlinson

The Full CPB Report
Summary of the Report

Inspector General Kenneth Konz's report confirms that Tomlinson applied a political test in pushing for the hiring of a new president and chief executive to lead the CPB. Tomlinson vigorously promoted Patricia Harrison, a former co-chair of the Republican National Committee, for the dual posts earlier this year. The full, Republican-dominated CPB board successfully demanded a formal search –- but ended up picking Harrison anyway

Tomlinson, a Republican, ended his controversial tenure when he resigned from the CPB board on Nov. 3.

The board of the Corporation for Public Broadcasting has gone through drastic shifts in the past five years:

The report also faulted Tomlinson for acting without the CPB board's knowledge or approval when he commissioned intensive monitoring of public radio and television shows such as The Diane Rehm Show and Now with Bill Moyers. Outside consultants were hired to perform the reviews, in which the political views of guests -- independent, liberal or conservative -- were tabulated.

Tomlinson's role in creating a new public affairs show, The Journal Editorial Report, violated the director's code of ethics, according to the review. Tomlinson "violated his fiduciary responsibilities and statutory prohibitions against Board member involvement in programming decisions" in his handling of the show, according to Konz's report.

The review exonerated Tomlinson for his decision to hire two ombudsmen at the agency, a move that met with loud disapproval from public broadcasters in television and radio. The Corporation for Public Broadcasting distributes some $400 million to public broadcasters in federal funds each year. It is an especially important source of money for PBS and NPR member stations.

While often critical of the former chairman, the report also cleared Tomlinson for using a Bush White House employee to help prepare a press release and talking points related to the hiring of the ombudsmen. The review found that the employee didn't seek to influence the ombudsmen's work, and that the employee joined the CPB soon after helping to prepare the release.

The inspector general's report included a rebuttal from Tomlinson, who said he was "disappointed, but not surprised," by the findings. He said politics, rather than good judgment, had prevailed.

Tomlinson, who was appointed to the CPB board by President Bill Clinton in 2000, became its chairman in 2003. He remains the head of the Broadcasting Board of Governors, which oversees international media outlets run by the U.S. government, including the Voice of America radio network and the Arabic al-Hurra television channel.