Accessibility links
The God Who Embraced Me John W. Fountain was four years old when police took his abusive father away. His lifelong sorrow from living without a "daddy" was comforted by finding a new father -- a spiritual father -- in God.

Listen
The God Who Embraced Me

I believe in God. Not that cosmic, intangible spirit-in-the-sky that Mama told me as a little boy "always was and always will be." But the God who embraced me when Daddy disappeared from our lives -- from my life at age four -- the night police led him away from our front door, down the stairs in handcuffs.

The God who warmed me when we could see our breath inside our freezing apartment, where the gas was disconnected in the dead of another wind-whipped Chicago winter, and there was no food, little hope and no hot water. 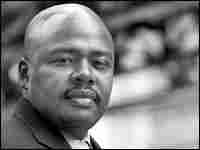 John W. Fountain is a professor of journalism at the University of Illinois at Urbana-Champaign. He has been a reporter for The Chicago Tribune and The Washington Post, and a national correspondent for The New York Times. Fountain is also the author of True Vine: A Young Black Man's Journey of Faith, Hope, and Clarity.

The God who held my hand when I witnessed boys in my 'hood swallowed by the elements, by death and by hopelessness; who claimed me when I felt like "no-man's son," amid the absence of any man to wrap his arms around me and tell me, "everything's going to be okay," to speak proudly of me, to call me son.

I believe in God, God the Father, embodied in his Son Jesus Christ. The God who allowed me to feel His presence -- whether by the warmth that filled my belly like hot chocolate on a cold afternoon, or that voice, whenever I found myself in the tempest of life's storms, telling me (even when I was told I was "nothing") that I was something, that I was His, and that even amid the desertion of the man who gave me his name and DNA and little else, I might find in Him sustenance.

I believe in God, the God who I have come to know as father, as Abba -- Daddy.

I always envied boys I saw walking hand-in-hand with their fathers. I thirsted for the conversations fathers and sons have about the birds and the bees, or about nothing at all -- simply feeling his breath, heartbeat, presence. As a boy, I used to sit on the front porch watching the cars roll by, imagining that one day one would park and the man getting out would be my daddy. But it never happened.

When I was 18, I could find no tears that Alabama winter's evening in January 1979 as I stood finally -- face to face -- with my father lying cold in a casket, his eyes sealed, his heart no longer beating, his breath forever stilled. Killed in a car accident, he died drunk, leaving me hobbled by the sorrow of years of fatherlessness.

By then, it had been years since Mama had summoned the police to our apartment that night, fearing that Daddy might hurt her -- hit her -- again. Finally, his alcoholism consumed what good there was of him until it swallowed him whole.

It wasn't until many years later, standing over my father's grave for a long overdue conversation, that my tears flowed. I told him about the man I had become. I told him about how much I wished he had been in my life. And I realized fully that in his absence, I had found another. Or that He -- God, the Father, God, my Father -- had found me.