Accessibility links
Iraq Focus Persists as Bush Attends Asian Summit A respected Democratic lawmaker's call for U.S. troops to withdrawn from Iraq has drawn a response from the White House. The Iraq war topic continued to stay in the spotlight as President Bush attended the Asia-Pacific Economic Cooperation forum in South Korea.

A respected Democratic lawmaker's call for U.S. troops to withdrawn from Iraq has drawn a response from the White House. The Iraq war topic continued to stay in the spotlight as President Bush attended the Asia-Pacific Economic Cooperation forum in South Korea. 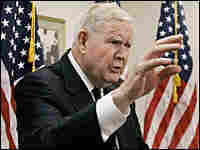 Even as they battled over the budget, lawmakers resumed a fierce debate over the war in Iraq. Yesterday, a Democrat who once supported the war, called for US troops to be withdrawn. John Murtha is one of his party's leaders on defense matters.

Representative JOHN MURTHA (Democrat, Pennsylvania): Our troops have become the primary target of the insurgency. They are united against US forces, and we have become a catalyst for violence.

MONTAGNE: John Murtha is a Marine, now retired, who fought in two wars. He described the Iraq War as a flawed policy wrapped in an illusion. His statement brought immediate response from Republicans. House Speaker Dennis Hastert accused Democrats of waving the white flag to terrorists. South Carolina Congressman Joe Wilson put out a press release juxtaposing Murtha's statements with statements by the second in command of al-Qaeda.

There's also been response from the other side of the world, where President Bush is attending a summit of Asian leaders. NPR's David Greene is traveling with the president in South Korea, and, David, what is the White House saying?

Well, Steve, it was interesting. The White House really dug its heels into domestic politics, even here from South Korea. They circulated a statement to reporters who are traveling with the president, accusing Congressman Murtha of supporting the policies of filmmaker Michael Moore and being part of the extreme wing of the Democratic Party. And they were, of course, talking about a member of Congress who's a decorated combat veteran with a lot of respect on Capitol Hill. So it seems to show how determined this White House really is right now to fend off criticism, fend off any criticism of their Iraq War policy, any suggestion that they misled the country. The White House is saying their response to Democrats and other critics is going to be strong, it's going to be sustained, and they seem to be ready to fire back whenever their policy's questioned.

GREENE: There was. We're still trying to nail down exactly what South Korea's intentions are. When President Bush met with President Rho Moo-hyun yesterday, the topic of any sort of withdrawal never came up, according to White House officials, and Mr. Bush praised the South Koreans for having a contingent of more than 3,000 troops in Iraq. That's more than any country, besides the United States and Great Britain. So it came as a big surprise, and the South Korean Defense Ministry today proposed to the ruling party in South Korea that it bring home about a third of its troops when they decide to extend the deployment for next year. So it came as a shocker.

INSKEEP: Well, what's been the White House response to that?

GREENE: Well, they were scrambling for much of the day in the press center. You saw White House officials going and trying to figure out exactly how to respond. They're playing this as a discussion, a debate that's going on among lawmakers and the government in South Korea and they said they have gotten no official word yet from the South Koreans that there is going to be any sort of withdrawal. What we know is that President Rho's government allowed word of this possible withdrawal to get out somehow with President Bush right here in the country. There's no doubt he could have waited another couple of days when Mr. Bush is gone, so you have to think he was trying to send some sort of message, whatever it turns out to be, and it seems like another setback for President Bush, even if it's just symbolic, and another example of how Mr. Bush can't really escape the political pull from Iraq at the moment.

INSKEEP: So now even as this news shoots around the world, the Asian summit has opened where you are. President Bush has been meeting with several leaders, and you've been watching the ceremony of all this.

GREENE: We have. There's a lot of ceremony. There have been some substantive meetings. All the leaders gathered in the opening session. There have been some bilateral meetings on the side. Mr. Bush met with Russian President Vladimir Putin today, and they had some thorny issues to talk about, including some disagreements over how to deal with Iran and its nuclear program. But the White House said not to expect any huge breakthroughs from this summit, so there'll be some attention on all the ceremony. The leaders are all having an opening night dinner with a full Korean menu. There's mushroom wine and chestnut porridge, according to summit officials, as well as kimchi, which is a spicy Korean vegetable dish that's pretty full of garlic, and the leaders are all going to be gathering for a photo, as well. They're going to be wearing Korean silk overcoats, including President Bush. We've seen pictures of them in the newspaper, and stay tuned for when all the leaders put them on.

INSKEEP: Well, David, on this weekend before Thanksgiving, I hope you get yourself some of that mushroom wine, OK?

INSKEEP: NPR's David Greene is with the president in Busan, South Korea.