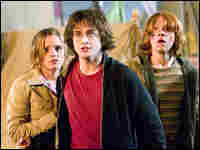 See a Trailer for the Film

Newell is a veteran of film and British television. His previous movies include Donnie Brasco and 2003's Mona Lisa Smile.