Accessibility links
'One Billion Customers': Insights into China's Market Former Wall Street Journal China bureau chief James McGregor, now a businessman, gained valuable insight into the emerging markets in China. His new book, One Billion Customers: Lessons From the Front Lines of Doing Business in China, details the ins-and-outs of Chinese business practices, and what President Bush can expect when he arrives in Beijing.

Former Wall Street Journal China bureau chief James McGregor, now a businessman, gained valuable insight into the emerging markets in China. His new book, One Billion Customers: Lessons From the Front Lines of Doing Business in China, details the ins-and-outs of Chinese business practices, and what President Bush can expect when he arrives in Beijing.

President Bush and other Pacific Rim leaders met today for the APEC summit in Busan, South Korea. Among other things, they urged the European Union to cut tariffs on imported farm goods and they discussed measures against bird flu. Tomorrow, President Bush will be in China, whose leaders he rebuked earlier this week, for not matching the country's growing economic power with greater democracy. China is the third largest trading partner for the United States and its importance is only expected to grow. I spoke earlier with journalist-turned-businessman James McGregor. He lives and works in China, and he's the author of the new book "One Billion Customers: Lessons From the Front Lines of Doing Business in China."

Mr. JAMES McGREGOR (Author, "One Billion Customers"): This place has nothing to do with communism. You can't look at China through the eyes of the Soviet Union or Communist China. That's kind of stir-fry Kremlinology. This country is capitalist down to its bone marrow, and they are completely commercial in the way they do things. Yeah, they're very focused. It's an authoritarian government, but it's a capitalist system.

BRAND: Give us a detail of how it is such an overwhelmingly capitalist system.

BRAND: Well, this has all happened very, very quickly, in the last decade or so. China has gone from a relatively closed Communist nation to, as we say, a hypercapitalist one, so what does it feel like to be in the midst of a country that's changing so quickly?

Mr. McGREGOR: If you look at China in terms of the United States, things have happened so fast, you can kind of feel the wind on your face. I mean, this is a country that has, in the past 15 years, compared to the US, gone through the robber baron era of the late 1800s, the financial speculation of the 1920s, the rural-to-urban migration of the 1930s, the first car, first college education, first vacation consumer of the 1950s, and aspects of the social appeal of the 1960s. What we've gone through in a hundred years, they've done in 15.

BRAND: Well, what about its history and its traditions? It must have more than just a capitalistic ethic?

Mr. McGREGOR: Well, I don't know. If you look at China's history, I mean, the equivalent of saying, `Merry Christmas' in China--How do you say, `Happy New Year' for Chinese New Year in Chinese? It's (Chinese spoken), or `Congratulations on getting rich.' So I think these traditions do go back. I think one of the--I mean, you have to look at China really as simultaneously the world's largest start-up and the world's largest turnaround. It's a start-up in that in the last 15, 20 years, they're doing everything for the first time and they go as fast as they can. They copy what other people in the world do and they make it up every day, just like any start-up in the Silicon Valley. On the other hand, it's a turnaround because they have a 2,000-year cultural encoding that make people behave certain ways and just form the way society works.

BRAND: We hear repeatedly here in the States that our century is over. We owned the 20th century and the 21st century belongs to China and that China will soon overtake America economically. What do you think of that?

Mr. McGREGOR: No, it won't overtake America economically. China has a lot of its own internal problems that are going to be cropping up more and more in the next decade. Environment--this country is completely trashed. I mean, 16 of the world's 20 most polluted cities are in China. The waterways of China are toxic. The haves and the have-nots--as China's gotten richer, the people who have--the people in the countryside have fallen behind, the health-care systems, and this government knows that, but they've got to go a long way towards cleaning it up. In the 1990s, the government of China was really trickle-down Republicans in some ways. They put all of the countries' money into building dazzling infrastructure of dozens of ports and airports and highway systems and other--telecom system that's superior to anybody in the world, but the health-care system and the social systems were falling behind. And they have to now clean that up. This country is--they're not going to take over the world anytime soon. They're going to be focused on their own internal problems for a decade.

Mr. McGREGOR: Well, America has to wake up, to be honest with you. I mean, Treasury Secretary Snow was here a month ago telling the Chinese people they want--you should spend more and save less. That's not what my mother taught me. The Chinese are acting like we did in the 1950s. They're saving their money, they're working hard, they're focusing on education because they've come from nothing and they're very hungry to get ahead. What America needs to learn from China is that we better wake up. We are--China is now the fourth pillar of economic growth around the world. We've got the US, Europe, Japan and now China, and it's a fact of life and we have to compete to stay ahead. China's a new challenger and the only way you take on a challenger is you beat them. You don't beat them down. You beat them in their own game.

BRAND: James McGregor is the author of the book "One Billion Customers: Lessons From the Front Lines of Doing Business in China," and he spoke to us from Beijing.

Thank you very much for joining us.

Mr. McGREGOR: Thank you for having me.

BRAND: Stay with us on DAY TO DAY from NPR News. 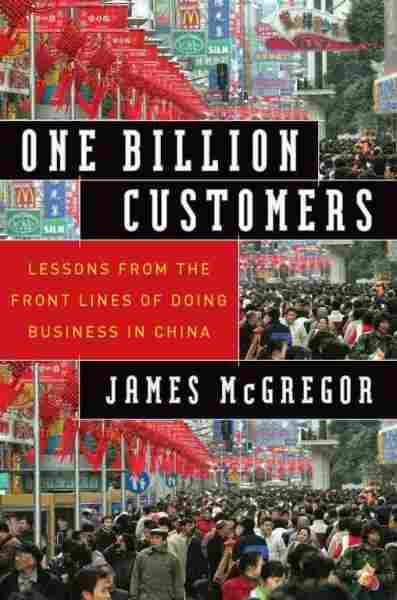 Lessons from the Front Lines of Doing Business in China