Accessibility links
A Rural Struggle to Keep the Family Fed Some residents of Smyth County, Va., are struggling to pay the bills and feed their families. Robbie Hankins works full-time, and his wife, Wreatha, works part-time. Yet the couple must resort to extraordinary measures to keep food on the table.

Listen
A Rural Struggle to Keep the Family Fed 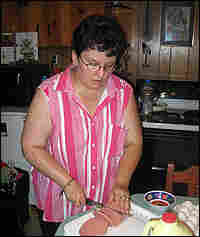 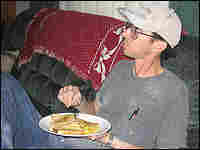 Robbie Hankins works fulltime at a cement plant but can't afford the $400 monthly premiums for the company's health insurance plan. The Hankins' three children get health insurance under a state program but Robbie and his wife, Wreatha, have no coverage. Evie Stone, NPR hide caption

A look at how the family of five's food spending compares with government estimates for families of a similar size. Nov. 21, 2005 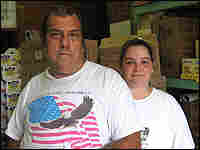 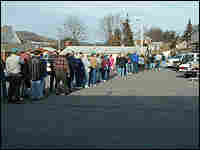 Waiting in line for food at the Atkins Church of God Food Pantry in Atkins, Va. These pantries say many of the people who come to them for help have jobs, but no medical insurance. Rev. Nouhad Melki hide caption

Most Americans get plenty to eat, according to a survey of 50,000 people conducted last year for the Economic Research Service (ERS) of the U.S. Department of Agriculture. The ERS says the survey indicates that 87 percent of Americans -- more than 250 million people -- are considered "food secure." They don't have to worry about where their next meal will come from.

Hunger By the Numbers

Proportion of people surveyed by America's Second Harvest forced to choose between buying food and rent or mortgage payments: 36 percent(2)

Proportion of people surveyed by America's Second Harvest forced to choose between buying food and paying for medicine or medical care: 30 percent (2)

That leaves 38 million people classified as "food insecure" by the government. They can't be sure they'll have enough money for food. About a third of that group at times goes without eating.

The nation's biggest cities have the biggest proportion of people reporting food insecurity, with 17 percent saying they fit that description. But people from the country's smallest communities are not far behind. Fifteen percent of the rural people surveyed are uncertain about getting enough food. Many of them live in households where at least one adult works. A 2001 survey by America's Second Harvest of 32,000 people receiving emergency food from food banks, food pantries and shelters found that 40 percent had at least one adult working.

In Smyth County, Va., the Hankins family lives these statistics every day. Their rural home is near the town of Chilhowie, a place of plenty once. Chilhowie is a Cherokee word, meaning "valley of many deer." Just up the road is Hungry Mother State Park, a place named for a local legend about a mother's sacrifice for a hungry child.

Wreatha Hankins is a 37-year-old mom with three children and a working husband. She has resorted to extraordinary measures to make sure her family eats, including skipping meals herself, skipping medicine for epilepsy and chronic back pain, doing her own dental work, selling family heirlooms and scouring Smyth County for the cheapest food available. She searches for food bargains at dollar stores, flea markets, roadside stands and the nearly expired meat section at supermarkets.

"We're the working poor," Wreatha says. In fact, Robbie Hankins works full-time at a cement plant. Wreatha works part-time as a substitute teacher. Last year, the couple made $22,000. That puts them just below the federal poverty threshold for a family of five. But it's too much for food stamps. The family does get a monthly, 125-pound box of groceries from a local food pantry. And the children get free lunches at school. Eating otherwise is sometimes a challenge. "It bothers me knowing that I don't know whether we're going to have food from one week to the next," says Robbie.

The "food insecure" in rural places face special challenges. High gas prices make the hunt for cheap or free food expensive. Some rural people, especially the disabled and elderly, don't have cars, or cars that run reliably. And grocery stores and food pantries are fewer and farther between.

The Hankins are typical of the families seeking help at the Bread of Life Community Food Pantry in nearby Saltville, Va. "Actually, nine-tenths of the people we have do work," says Jennifer Cross, who runs the food pantry with her father. "A lot of them have jobs with no insurance. By the time they go to the doctor and buy medicine, there's no money left for food."

The Hankins family hasn't always lived this way. Times were better a decade ago, when the Hankins lived in Maryland and made as much as $70,000 a year. A dispute with an employer cost Robbie his job as a plant supervisor. He had family in Smyth County, Va., where manufacturing jobs were plentiful then. That was just before the county lost more than 2,500 textile and furniture plant jobs to what a local official calls "overseas competition."

Wreatha told a preacher once that she considered selling her soul for food. "But I haven't sold my soul," she says, "because there's a lesson here. Somewhere, there's a lesson."