Accessibility links
Long-time War Hawk, Murtha Is An Angry Dove John Murtha’s stunning comments calling for the withdrawal of U.S. troops from Iraq was particularly astonishing because the veteran Pennsylvania congressman is anything but a publicity seeker or a media hog. 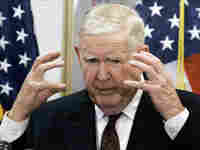 At a press conference on Thursday, Rep. John Murtha (D-PA) called for an immediate withdrawal of U.S. troops from Iraq, saying he believed the armed forces "have done all they can." Mark Wilson, Getty Images hide caption

Education: Left college to join the Marines, but later received a B.A. in Economics at the University of Pittsburgh.

* Left college in 1952 to join the Marines, where he served during the Korean War and eventually rose in rank to captain

* After his discharge from active duty, Murtha reenlisted and volunteered to serve in Vietnam in 1966-67, where he won two purple hearts, a Bronze Star with Combat "V" and the Vietnamese Cross of Gallantry.

* After a five-year stint in Pennsylvania's House, in 1974 Murtha was elected to the U.S Congress, the first Vietnam combat veteran to win a seat in Congress.

*As a member of the House Appropriations Committee, Murtha quickly built a track record of support for the military, voting consistently for money for both active duty soldiers and veterans.

*Breaking ranks with many Democrats, Murtha backed President Reagan's incursions in Central America in the 1980s.

*Among the most fervent backers of the 1991 Gulf War with Iraq, Murtha worked closely with President George H.W. Bush to gain support for the war in Congress.

*In September, 2002, Murtha voiced grave doubts about President George W. Bush's plans for war, complaining that he has not built a proper coalition and estimating the war will cost taxpayers at least $50 billion. He nonetheless voted later to authorize the war With Iraq.

*In May 2004, Murtha joined fellow Democrats in criticizing Defense Secretary Donald Rumsfeld for his role in the Abu Ghraib prison scandal. But he stopped short of calling for Rumsfeld to resign, as other Democrats do.

*In the fall of 2005, he led a House effort to pass the so-called McCain Amendment, a measure that would expressly prohibit "cruel, inhuman or degrading" treatment of terror suspects.

John Murtha's stunning comments calling for the withdrawal of U.S. troops from Iraq made the front page of newspapers around the country this week. It was particularly astonishing because the veteran Pennsylvania congressman is anything but a publicity seeker or a media hog. You won't, for instance, find him on the House floor opining on every subject under the sun.

But his counsel is widely sought. A decorated Vietnam War veteran -- one who has spent more than three decades on Capitol Hill as a behind-the-scenes power broker -- his thoughts and pronouncements on military matters and defense policy are respected on both sides of the aisle.

During the 2004 vice presidential debate, when he was asked what he could do about the "deeply divided electorate," Dick Cheney acknowledged that it was a "disappointment," and went on to say that things used to be different. "One of my strongest allies in Congress when I was secretary of defense was Jack Murtha, a Democrat who was chairman of the Defense Appropriations Subcommittee."

No longer. Following Murtha's blistering attack Thursday on the Bush administration's war policy, he was asked about comments from the president and vice president calling it "irresponsible" for Democrats to criticize the war. This was Murtha's response: "I like guys who've never been there to criticize us who've been there. I like that. I like guys who got five deferments and never been there, and send people to war, and then don't like to hear suggestions about what needs to be done. I resent the fact on Veterans Day he criticized Democrats for criticizing them."

Similarly, in 2004, when Murtha first began to question the conduct of the war, Republicans in the House harshly criticized him. Then-Majority Leader Tom DeLay called Murtha's remarks a "calculated, craven political stunt." Unbowed, Murtha fired back at the former pest exterminator: "When I was in Vietnam, you were killing bugs."

Murtha's most recent comments have once again thrust him into the spotlight. But Murtha's initial election to Congress was national news as well. Following the death of a 24-year Republican incumbent in 1973, Murtha won a special election in February of the following year -- at a time when the Nixon administration was becoming overwhelmed with revelations about the ongoing Watergate investigation. Murtha won by only 122 votes (becoming the first Vietnam veteran to serve in Congress), but it was a harbinger for Republican troubles in the 1974 midterm elections. He has won comfortably ever since.

Murtha has been a reliable pro-labor lawmaker during his time in the House. He voted in favor of going to war in Iraq in 2002 and also supported the first Gulf War in 1991. He backs drilling for oil in Alaska but has voted no on the Bush tax cuts. He also opposes abortion rights and supports the death penalty. And that fits the character of his aging, culturally conservative district, the 12th, situated in southwest Pennsylvania, and his hometown of Johnstown.

Johnstown has been ravaged three times by devastating floods -- more than 2,200 people died in the 1889 flood -- and though it has bounced back each time to some degree, the decline of the coal and steel industries has left it hurting economically. It regularly votes for Democratic presidential candidates, though John Kerry only carried the district by two percentage points last year, partly because of the Bush administration's support for import quotas on steel.