Accessibility links
Inside Johnny Cash's Folsom Prison In 1968, a young reporter took a tape recorder with him to Johnny Cash's concert inside Folsom Prison. Beley's recording is familiar, but it's from an entirely new perspective: that of the audience. 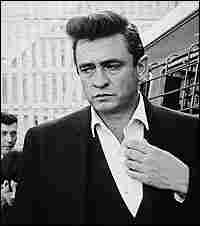 At Folsom Prison in 1968, Johnny Cash gave a concert that would later famously give his fans a peek inside prison walls.

Gene Beley was at the prison the day the record, Johnny Cash at Folsom Prison, was made. A friend had invited the young Ventura Star Free Press reporter to the concert, and Beley decided to bring along a tape recorder.

Beley's recording is familiar, but it's from an entirely new perspective: that of the audience. In an excerpt from his essay about the event, published this fall in The Virginia Quarterly Review, Beley recalls the night before the concert:

We arrived at the El Rancho Motel and checked in. Cash was nervous about the weather in Nashville. He feared that the snow and ice would make it impossible for Carl Perkins, the Statler Brothers, the Tennessee Three, and Columbia's A&R man, Bob Johnston, to fly to Sacramento. So he called Nashville and found they had left and were laid over in San Francisco. While waiting for the others, we all met in one of our rooms. Reverend Gressett said he had a favor to ask of John.

"Johnny, I want you to hear a song written by Glen Sherley, an inmate in Folsom, serving five to life for armed robbery. You've been so busy that I haven't had a chance to tell you about it but I thought if you could mention tomorrow that you've heard the tape, it would please that ol' boy who wrote it."

"Does anyone have a tape recorder?" Cash asked.

"I do," I replied, and went to get the reel-to-reel Sony recorder that I had brought to record the concert for research purposes.

"All right, this is a take on 'Greystone Chapel,'" a deep voice, similar to Cash's own voice, said on the tape. Then the singing began:

Inside the walls of prison, my body may be,
But the Lord has set my soul free...

As the lyrics filled the room, accompanied by a bass beat from the prisoner's guitar, Cash's usual straight-faced, deep-creased cheeks began changing to a smile, with his eyes glowing, radiating enthusiasm.

There's a Greystone chapel here at Folsom,
A house of worship in this den of sin.
You wouldn't think God had a place at Folsom,
But he's saved the soul of many lost men.

When the tape was finished, Cash said, "This has got to be recorded as a single, and I want to record it tomorrow on the album during the show." Cash began scribbling the words down in a notebook and tried singing the phrase, while beating out the rhythm with one hand on his knee, the other hand tapping a pen on the desk.

That evening Cash was dressed in a blue jumpsuit and cowboy boots when his A&R man Bob Johnston and the other performers arrived.

"Do you ever work on a stool?" Johnston asked Cash.

"Are you going to have someone introduce you?"

"I thought I'd come out and introduce myself and sing."

Reprinted with permission from 'The Virginia Quarterly Review,' Winter 2005