Accessibility links
'Walk the Line' Walks a Straight Line Movie critic Bob Mondello says Walk The Line, the new biopic about the country music legend known as "The Man in Black, boasts terrific performances from Joaquin Phoenix as Johnny Cash and Reese Witherspoon as June Carter, while the film itself is conventional.

Movie critic Bob Mondello says Walk The Line, the new biopic about the country music legend known as "The Man in Black, boasts terrific performances from Joaquin Phoenix as Johnny Cash and Reese Witherspoon as June Carter, while the film itself is conventional. 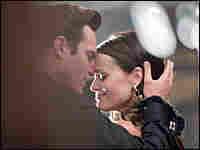 The Man in Black abused pills and liquor and sang in a deep baritone about the outlaw life, but that's not who we meet at first. The film introduces little Johnny Cash, grieving for an older brother, joining the Air Force to get away from a hard-hearted dad, marrying his school sweetheart and auditioning at Sun Records with a gospel tune. He's a nice kid, and when he gets a singing tour with some other kids named Elvis and Jerry Lee and chats up a former child star named June Carter, he's shyness itself.

Mr. JOAQUIN PHOENIX: (As Johnny Cash) Me and my brother Jack, we always listened to your songs. Like "Swallerin' Place."

Mr. PHOENIX: (As Johnny Cash) Yeah. We liked it when you'd sing one alone.

Ms. WITHERSPOON: (As June Carter) Well, you and Jack are the only ones.

Mr. PHOENIX: (As Johnny Cash) What do you mean?

Ms. WITHERSPOON: (As June Carter) I'm not really much of a singer, Johnny. A lot of personality. I got sass. I give it my all. But my sister Anita's really the one who's got the pipes.

MONDELLO: A friendship develops, but because they're both married, nothing becomes of it for a while. Then June gets a divorce and things heat up a bit, though Johnny has to do his wooing on stage because June won't hear of it backstage.

Ms. WITHERSPOON: (As June Carter) Hi, folks. How you all doing again? I hope you all don't mind my bare feet. So what are we gonna sing, Johnny? You got me out here. Is that what your plan is?

Mr. PHOENIX: (As Johnny Cash) There wasn't a better way to put it behind you.

Ms. WITHERSPOON: (As June Carter) I'm not going to do it.

Ms. WITHERSPOON: (As June Carter; singing) And I've got arms.

Mr. PHOENIX and Ms. WITHERSPOON: (As Johnny Cash and June Carter; singing in unison) Let's get together and use those arms.

MONDELLO: Joaquin Phoenix and Reese Witherspoon are doing their own singing, and it's plenty persuasive, if not always a precise match for the real Cash and Carter. What the actors do nail is the emotional chemistry of a high-profile couple who, for the longest time, could really only be alone together when they were on stage. They seem to blossom under the lights, and watching that, the emotional connection, is more compelling than the fact that the actors have captured the singers' body language: Witherspoon stamping her foot so hard it makes that mane of dark hair quiver; Phoenix hitching his guitar way up into his armpit like Cash did and twisting in toward the mike as if he's going to swallow it. Offstage, they are less animated, having to deal with the downtimes as Cash gets hooked on amphetamines.

MONDELLO: The film doesn't really suggest that Cash and Carter were any different from other musicians who've ridden stardom through a substance abuse flameout. You'd think there'd be more edge to country music's biggest outlaw, but maybe not when he's in love and with director James Mangold pushing that side of the story. "Walk the Line" never crosses the line in the places it might. The film works, but in a conventional way, as a standard showbiz saga with Cash's outlaw quality starting out as this huge obstacle but ending up seeming little more than smart commercial music packaging. Going to Folsom Prison for his comeback--what a great career move. Fortunately, the scene knocks your socks off. I'm Bob Mondello.

Mr. PHOENIX: (As Johnny Cash) This song's for your warden.

Mr. PHOENIX: (As Johnny Cash; singing) Early one morning while making the rounds, I took a shot of cocaine and I shot my woman down. I went right home and I went to bed and put that loving .44...