Accessibility links
Returning Home to a 'New' New Orleans New Orleans is the hometown of our editor, Gwendolyn Thompkins, and she went back recently to to see how the city is making out. With more than 300,000 people gone, she says, New Orleans really is 'new'. She sent back these impressions.

The most often repeated line in the new New Orleans is, by far, "How'd you make out?"

Most of New Orleans is gone for the moment. Well more than a quarter million people have made a trail of tears to some other reach of the state, or the nation. Even the birds are gone.

The city today is a mixture of high and low, with not much in between. You see adults and some young people, but almost no school children -- they're all finishing the semester someplace else. The wealthy and the upper middle class are mostly there, but the middle middles and the low middles are mostly gone.

Many of the poor people queue up -- black and white -- in little integrated lines at FEMA Stations, or Red Cross staging areas for the Meals Ready to Eat. But don't let the lines fool you: A city that used to be more than 60 percent black is now overwhelmingly white. It feels kind of strange to go back to being a minority in New Orleans. I am frequently the only black person I can see on the street. And the white people look just as surprised.

Perhaps the toughest part of surviving for New Orleanians is the loneliness. That's because we're used to having company -- either our neighbors or people from all over the world who want to come and see us. These days the hotels are filled with contractors and FEMA people and folks on assignment who would rather be at home with their own families and friends. Some of them will never get the hang of it here. I saw one man at Cafe Du Monde in the French Quarter snap his fingers at a waiter and in a booming voice say -- "I want beignets and a COFFEE au lait!" That kind of talk is a no-no in these parts.

A passage from the U.S. Army Manual is my best advice to anyone living in the city now. It's under the heading called, "Act like the Natives."

"If you are in a friendly area, one of the best ways to gain rapport with the natives is to show interest in their tools and their ways of procuring water and food. By studying the people, you will learn to respect them. You can often make valuable friends and most important, you can learn to adapt to their environment and increase your chances of survival. " 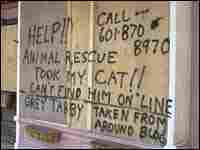 'Cryin' in the Streets'

James Booker from Resurrection of the Bayou Maharajah (Rounder Records)

Kermit Ruffins from A Night Out in New Orleans, The Unique Sounds of Our Music and Musicians (New Orleans Tourism and Marketing; also on Basin Street Records)

John Boutte from At the Foot of Canal Street (Valley Entertainment)

'Drop Me Off in New Orleans'

'On the Sunny Side of the Street'

'At the Foot of Canal Street'