Accessibility links
Western Architects Push the Envelope in Beijing China's urbanization is perhaps the most extensive the world has ever seen. In Beijing and elsewhere, the job of designing prominent urban buildings is going more often than not to Western architects -- and the rush to remake the capital of China is crowding the ancient city with out-of-character designs. 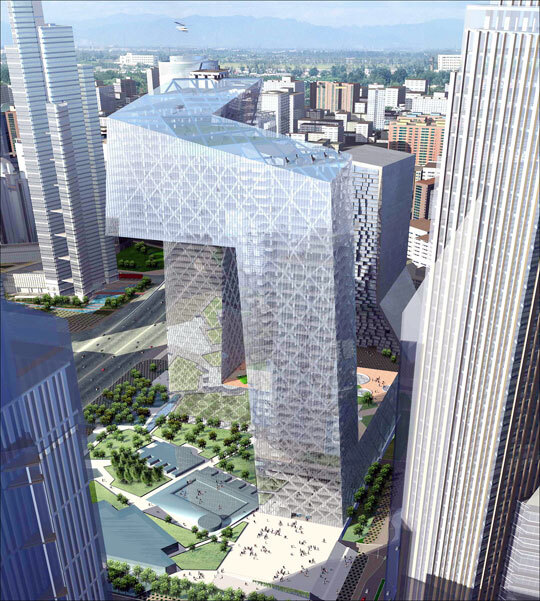 Seen here in an artist's rendering, China Central Television office building is among the architectural adventures now underway in Beijing.

China's urbanization is perhaps the most extensive the world has ever seen. And in Beijing and elsewhere, the job of designing prominent urban buildings is going more often than not to Western architects.

Take the new offices of state broadcaster China Central Television, which are now just a couple of vast pits, with clusters of yellow helmeted workers weaving around tufts of steel rods and girders.

But when the structure is finished, it will cut a striking profile. "We could describe it as a tube folded in space," says Dutch architect Ole Scheeren, who helped design the structure. "[It] consists of an L-shaped base and two towers that rise from both ends of the L. The towers are inclined six degrees in two directions, and as they reach the top at about 180 meters, they cantilever out to connect in a large overhang."

Scheeren says it's his firm's most ambitious project to date. Whatever people think of the design, most agree that it's on architecture's cutting edge.

Meanwhile in northern Beijing, Swiss architects Herzog and De Meuron have designed the new Olympic National Stadium. Locals have dubbed it "The Bird's Nest" for the seemingly chaotic tangle of steel girders that forms its exterior. Next to it is a swimming center constructed of giant translucent bubbles, designed by the Australian firm PTW. British architect Sir Norman Foster has drawn up plans for a new airport terminal here that is supposed to look like a dragon.

And right off Tiananmen Square -- within sight of the Forbidden City's vermilion walls and yellow-tiled roofs -- is the new National Theater. Workers are already putting the last glass and titanium plates on its egg-shaped dome. Some have nicknamed Frenchman Paul Andreu's creation "The Blob."

The new buildings are giving some residents of this ancient city a case of visual "future shock."