Accessibility links
Mussels Made Easy Mussels cooked in calvados with shallots, bacon and mushrooms sounds more like something to order on a menu than cook at home. Anthony Bourdain sent the recipe to this food writer, and she's got the tips to make it easy. 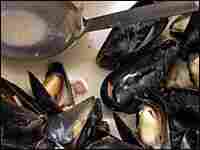 The broth for these mussels cooked in calvados with shallots, bacon and mushrooms is good enough to call soup. Recipe and mussel prep primer below. Andrew Pockrose hide caption

Recently, I cooked dinner for what I consider a crowd. Eight people (somehow) gathered at our dining room table, knees and elbows knocking together, enjoying a meal that I had made. Given that I'm a food writer, this may not sound like much of an accomplishment, but, nearly 10 years into motherhood, I still find myself stymied at the thought of cooking dinner. Even pasta is daunting when there are kids in the house. And there are always kids in the house at dinnertime.

Much to my surprise and delight, though, my dinner party was a total success. Feeling confident (and maybe even slightly cocky), I decided to make dinner again, but I knew I needed help, professional help.

I decided to start at the top and boldly wrote to Anthony Bourdain, executive chef at Brasserie Les Halles in New York and the author of the nonfiction best-seller Kitchen Confidential, along with other cookbooks and novels. He is also, to me, a rock 'n' roll culinary god (not to overstate the matter).

So imagine my surprise when, within days, I got a brief note back, along with a recipe for something exciting called Moules Normandes. OK, so actually the e-mail was from his assistant. But the recipe was all his.

I pored over the note looking for hidden messages Mr. Anthony Bourdain might secretly have sent me, but if there were any, I couldn't find them. Disappointed but not surprised, I moved onto the meat of the matter: the recipe itself.

I couldn't help noticing that the title was en Francais. Since my goal was to impress people, I thought this was a good start. Then I realized that moules are actually mussels, which I have eaten with delight on many occasions, but have only actually cooked a couple of times. Fearfully. Anthony Bourdain was already leading me down a dangerous path. He must have known I'd follow him anywhere. Mussels for dinner it was.

And so, I did what comes naturally to me: I made things worse. At the last minute, I recklessly invited a chef friend and his family to dinner. So now my day would include not only taking my son to the dentist after school, but also taking him shopping, and then cooking dinner for eight.

Mussels? For eight? Including a chef? What was I thinking?

Realizing I had the gastric health of both our friends and three children in my hands, the temptation to pretend I knew what I was doing grew weak; the desire to learn, strong. The only thing to do was to corral my friend the chef into giving me a free private lesson in shellfish safety. Happily, he obliged and his primer is below. It's given me a newfound confidence about mussel cookery.

I wish I could tell you how long I spent on prep time for this dish, but due to the distractions caused by the general breakdown in civility that happens just before dinner around here, it was hard to keep track. I can say that the most time-consuming part of the preparation was my piece-by-piece inspection of six pounds of mussels that, frankly, bordered on obsessive. Now that I know how to manage them, next time will go more quickly.

Dinner consisted of mussels and good bread (along with plain pasta for the picky four- and 45-year-olds). How'd it go? The chef's wife called the meal delicious, and while I was happy to hear it, I anxiously awaited a verdict from the chef himself. While pretending to focus on my plate, I surreptitiously glanced up at him as he took one bite, then another, then proceeded to empty his bowl. Unable to take it anymore, I prodded him. "Well?" I asked. He raised his eyebrows and begrudgingly admitted, "It's a good recipe."

He was right. Those bivalves were now swimming in a heavenly sea of cream, bacon and calvados. No one could stop eating them (or better yet, sopping up the sauce with bread). By dinner's end, the chef had downed three servings. I was thrilled. But even acclaim from a chef couldn't compare with what else was happening at the table: Three kids, all under the age of 10, had tried the mussels. And liked them. And asked for more. By the end of the meal, I realized I had transformed abject fear into unmitigated glee, not to mention several full bellies.

My work here was done. I could rest easy. That is, until the next time…

Serves four as a main course.

1/2 apple, cored, peeled and cut into small dice or chunks

In a small pot, cook the bacon over medium-high heat until the meat is brown and the fat has been rendered, about 10 minutes, stirring occasionally to avoid sticking. Discard the fat and reserve the meat.

In a large pot, heat the butter until it foams. Add the shallot and cook until soft, about 3 minutes. Add the mushrooms and the apple and cook for 5 minutes, then stir in the calvados, scraping the bottom of the pot with a wooden spoon to dislodge any good brown stuff that might be clinging there. Stir in the cream and season with salt and pepper.

Once the mixture has come to a boil, add the mussels and cover. Cook for 10 minutes, or until all of the mussels have opened. Shake. Add the cooked bacon to the mussels. Cook for another minute. Shake again. Serve immediately.

1. Always buy mussels as close as possible to when you'll cook them, but definitely the same day.

2. Mussels should be closed the way my daughter's mouth is closed when her pediatrician wants to look in her throat -- except that mussels don't have hands they can also clamp over their faces.

4. The bag my mussels came in suggested "lightly tapping" the slightly open ones. Instead, shake and swirl the lot of them in the bowl, pretty aggressively, for about 30 seconds. A number of them will have closed up again (in fear, I'm guessing). Rinse these, then throw them into the cooking pot. The rest, throw away.

5. When it comes to cleaning the little guys, there are a couple things to think about. First, even though most mussels these days are cultivated (and not wild), they're still sandy. You can scrub them under running water, or you can fill a bowl with clean water and swirl them around in there; dump the water out and repeat one more time or until most of the grit is gone.

Also, remember mussels die in fresh water, so don't soak them to get them even cleaner. My friend says he'd rather cook live mussels with a bit of sand than dead ones without.

6. As for the "beard," it's a little tuft of fuzzy "hair" emerging from the inside of the shell, kind of like a mollusk soul patch. Harden your heart, take a deep breath and yank it out with your fingers or a paring knife. You probably won't get every single last bit, but then these are animals of the wild. It's all right.

7. Finally, when looking to see if the mussels are done cooking, think "baby opening its mouth for milk," not "toddler eating spinach." In other words, they should be more than just a little open. They should be yawning.