Accessibility links
O'Hare Growth May Mean Moving a Cemetery Chicago officials want to expand the city's O'Hare airport, even though it would mean relocating a nearby cemetery. But one main question remains: exactly how the graves might be moved.

Chicago officials want to expand the city's O'Hare airport, even though it would mean relocating a nearby cemetery. But one main question remains: exactly how the graves might be moved. 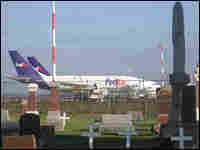 Many of the graves in this cemetery are already a stone's throw from O'Hare airport's runways. David Schaper, NPR hide caption

This week, a federal judge in Chicago gave the go-ahead for the city's planned $15 billion expansion of O'Hare Airport, but an appeals court has yet to decide whether the city will be allowed to move a historic graveyard located on land where the city wants to put a new runway. If the court says yes, the question will become how to relocate an old cemetery. NPR's David Schaper has this report.

St. Johannas Cemetery sits literally a stone's throw from a FedEx cargo bay and from one of O'Hare's busy runways. Originally in a church yard and surrounded by orchards, the airport once known as Orchard Field has grown up around it. It's hardly the peaceful final resting place it once was, and now it may not be so final a resting place at all.

Ms. HELEN SCLAIR: I often say the dead stand in the way of the living.

SCHAPER: Helen Sclair is known as the cemetery lady. She's a retired Chicago public schoolteacher and an amateur historian who calls herself an advocate for the dead. Sclair has researched scores of current and former Chicago area cemeteries, including St. Johannas.

Ms. SCLAIR: When was the first burial? I really don't know exactly, but it could have been as early as 1840. So it has a very, very long history, a long, proud history, a long loving history.

SCHAPER: And that's why Sclair says if the 1,300 graves of St. Johannas are dug up and moved, along with the fragile marble and sandstone grave markers, the job must be done with extreme care. It's the kind of thing Lee Ellen Atts(ph) does for a living.

Ms. LEE ELLEN ATTS (Anthropologist): First thing you want to know is exactly how many graves are out there.

SCHAPER: Atts is an anthropologist and project manager for the Atlanta-based firm Brockington Cultural Resources. She works on about two or three cemetery relocations a year. She and other experts say in most cemeteries, not all burials are marked and maps and documents may be incomplete. High-tech tools like aerial photography and ground-penetrating radar can help locate those unmarked remains. Heavy machinery like backhoes can be used in some excavation work, but Att says not in places where there might be wooden coffins that could have disintegrated.

Ms. ATTS: For the graves that are over a hundred years old, probably they will dig those out by hand, and once they reach the skeletal remains, if there are any skeletal remains left, what we use is chopsticks.

Ms. ATTS: Basically because they're made out of bamboo. Bamboo is durable enough to dig with but it also doesn't cause as many scratches to the bone. So when we're working near the bone, we'll use chopsticks to clear the dirt away from the bone to cause as little damage as possible to the bone.

SCHAPER: Atts says it's a slow, meticulous process collecting the remains and much of the organic matter around them as the person may now be a part of the dirt. They are carefully placed in new coffins to be moved to a different cemetery. She says the work should always be done with the utmost reverence and respect for the dead.

Ms. ATTS: When you're excavating these burials, you're always cognizant of the fact that this was a human being, this was someone that people cared about, that they placed in here for a reason.

SCHAPER: Cemetery relocations can take months if not years to complete and Atts says they should always be done in close communication with any family members that can be found to assure that their wishes are honored. Such projects can be so problematic and expensive that some experts say for decades planners and engineers had an unwritten rule: Go out of your way to bypass cemeteries, but as cities and suburbs grow leaving precious little undeveloped land, cemetery relocations seem to be increasingly common. The problem now is often finding new burial places as few communities seem willing to make room for new cemeteries.