Accessibility links
Death of a Translator in an Iraq Without Saddam A foreign correspondent in Iraq explores the life and death of his translator. Jacki Lyden talks with radio journalist Michael Goldfarb about his new book Ahmad's War, Ahmad's Peace: Surviving Under Saddam, Dying in the New Iraq.

Listen
Death of a Translator in an Iraq Without Saddam

A foreign correspondent in Iraq explores the life and death of his translator. Jacki Lyden talks with radio journalist Michael Goldfarb about his new book Ahmad's War, Ahmad's Peace: Surviving Under Saddam, Dying in the New Iraq.

From NPR News, this is ALL THINGS CONSIDERED. I'm Debbie Elliott.

In 2003, reporter Michael Goldfarb traveled to Iraq to make a radio documentary about the war from the point of view of an Iraqi. First, he needed a translator. So just before the start of combat, Goldfarb headed to a hotel in Irbil in Kurdistan. There, he met a men named Ahmad Shawkat, who would become his translator and ultimately the central character in his documentary. After the program aired, Ahmad Shawkat was killed. Goldfarb has now written a book called "Ahmad's War, Ahmad's Peace." NPR's Jacki Lyden spoke with him about the book. They began their conversation with Goldfarb reading a passage about his first meeting with his interpreter.

Mr. MICHAEL GOLDFARB (Author, "Ahmad's War, Ahmad's Peace"): (Reading) `My initial impression was this just would not work. Ahmad seemed a bit shy; more important, he was too old. At first glance, he looked to be in late 50s, maybe even 60. Age mattered to me. If we came under fire, I needed to run or were among a crowd of people that turned into a mob, I didn't want to worry that my translator was physically incapable of running away with me or, worse yet, was going to have a heart attack when the pressure was on.'

When did you feel that Ahmad Shawkat was not just an ordinary translator, and the two of you had crossed some sort of threshold together in which you understood each other really well?

Mr. GOLDFARB: Almost immediately. He immediately started talking to me about American literature, which I found quite extraordinary. I was interviewing for a job to be my translator during a war, and he was talking about American literature. But, two, we were very close in age. And I think once I decided that I would make my documentary about him, because he was precisely the person I was looking for--I mean, he had been in and out of Saddam's dungeons four or five times in his life; he was living in internal exile, this--a Kurd married to an Arab--there were all kinds of extraordinary things about him.

Mr. GOLDFARB: Somebody once told me that Ahmad was my brother from another mother and--which is a wonderful phrase. And we had become close friends, and it was like I knew him for a very long time.

LYDEN: You mentioned that he had been incarcerated in Saddam's prisons at least several times. At one point he really expected never to see the light of day again because he had written a short story which offended the regime. But it was when he was forced to stop teaching at the University of Mosul that he was most heartbroken. Correct?

Mr. GOLDFARB: That's right. When Ahmad spoke of teaching--he was actually a lecturer in anatomy at the medical school in Mosul. And what he would do is he would organize poetry readings at this cafe in the old city of Mosul; it's a very picturesque part of the city. The idea was that him talking about literature--his view was that it was a way of discussing politics without getting in trouble with the regime. You could make points about the connectedness of human beings through, you know, love poetry or whatever. He was constantly being warned off by the Mukhabarat...

Mr. GOLDFARB: ...the secret police, about these lectures. You know, `Why do you have to do this? You teach science. This is what you do. You shouldn't have these discussions.' He'd been tortured, but the worst thing they could do to him--in his words, he said, `I was obliged to retire,' retire at the age of 35. And he was put on the Earth to teach. He taught me an enormous amount about Iraq. He was a splendid analyst of the country. And when they took that from him, that was the worst torture of all.

LYDEN: Michael, let me ask you, all through the early weeks of the war, you and he agreed that when it was safe, you would go into the city of Mosul. Mosul was his Paris, Mosul was his Athens. It's where he had taught, where he'd grown up. He wanted to go back there. And eventually the two of you do drive triumphantly along with troops and every other journalists anywhere in norther Iraq. You enter the city, and what happens?

Mr. GOLDFARB: Ahmad had been waiting for this moment for seven years. And we were driving in, and the first place we were going to go was to his brother-in-law's house. We did. And liberation is the most extraordinary thing to witness, to record. I mean, very few people listening to this will understand what it means to, you know, have your country be under a totalitarian dictator for a quarter of a century and then overnight, in the space of virtually no time, it's over, it's gone.

LYDEN: Mm-hmm. Although we have seen this over and over again, starting with Eastern Germany and...

Mr. GOLDFARB: It is a remarkable, remarkable thing to experience.

Mr. GOLDFARB: And we didn't see the looting as we drove into Mosul, but within hours it became clear that something much, much more sinister was at work. And we drove down to the center of Mosul. There's a grand intersection of several boulevard called Dewasa(ph), and there was a gun battle going on. And in addition to that, my friend decided to start a political argument with some little guy who was obviously a pro-Saddam fellow, who was cursing out George Bush.

LYDEN: Even at that moment, you had to intervene, and that might have saved him from harm. What happened to Ahmad Shawkat? Where were you when he was killed October the 28th, 2003?

Mr. GOLDFARB: I was at home in London. I had spoken to him just a few weeks earlier. And I was in Saudi Arabia doing some reporting, and it was a bizarre conversation. He said to me, `You know, Michael, you have to be very careful in Saudi Arabia. They don't like Americans, and you could be harmed.' And I said, `Man, are you kidding me? They've already started murdering anyone in Iraq who's identified with the Americans, and you are. You be careful.' And he said to me, `I don't care. What can they do to me else?'

Mr. GOLDFARB: He'd been putting out this newspaper; he'd been writing whatever he felt like. It was the first time in his life he'd ever been able to publish in his own country exactly what his thoughts were.

LYDEN: I love the title of it. Could you tell us?

Mr. GOLDFARB: The title of his newspaper was the Bilattijah, which is Arabic and poorly pronounced for `without direction.' It had a double meaning. It meant, `My country has no direction at this moment; nobody knows which way to go,' and, `Nobody directs me what to write. I write whatever I like.'

LYDEN: And he had returned to Mosul to publish this paper and establish a collective he called Freedom House.

Mr. GOLDFARB: That's right. Freedom House was a democracy-training institute. The US has, you know, been setting them up all over the country. He realized that he had to teach people how to develop what he called the `democratic mentality.' Unfortunately, he never really got a chance to get it going because on October 28th, 2003, he was gunned down on the roof of his office building in Mosul.

LYDEN: Do we know who killed him? Do you think it was people from the Baath regime, or--he had also written against the Islamists, who he called fascists, the Muslim Brotherhood and others. Do you have any idea who killed him?

Mr. GOLDFARB: My guess is that it was a combination of the two. Because he'd been in the Muslim Brotherhood, which was, for a long time, persecuted by Saddam and penetrated by the Mukhabarat, he very early on saw that the radical Muslims and the ex-Saddam loyalists had come together--and he was writing about this--had come together, and they were the real danger. Who carried out the hit? Were they paid? No one will ever know because in this new Iraq, there really isn't a functioning justice system. I mean, my friend is not the only person who's been murdered, you know, who would have been a grassroots leaders of a new democratic Iraq. And so his murderer walks free and will never be brought to justice. And his family has to live with that reality, and they've gone on with their lives.

ELLIOTT: Michael Goldfarb is the author of "Ahmad's War, Ahmad's Peace." He was speaking with NPR's Jacki Lyden. 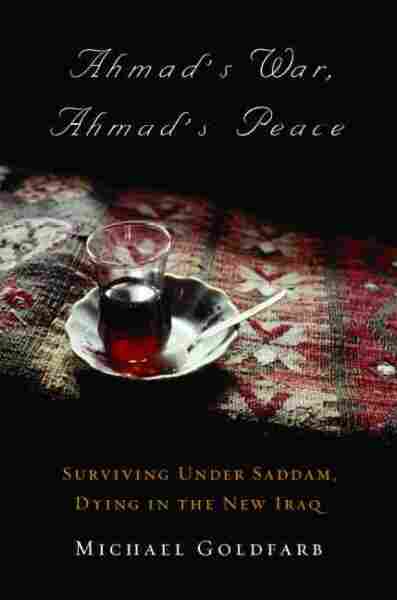 Surviving Under Saddam, Dying In The New Iraq