Accessibility links
The Hand of America's First Black Female Poet Phyllis Wheatley was America's first published black poet -- a native of Senegal, sold into slavery in Boston in 1761 and taught to read and write. Now a newly discovered letter by her is expected to fetch top dollar at auction. 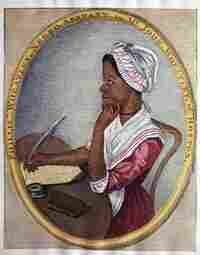 Phyllis Wheatley was America's first published black poet. She was born in the West African nation of Senegal and sold into slavery to John Wheatley of Boston in 1761.

toggle caption
Swann Galleries
Front of Letter
Back of Letter

Wheatley was too sickly for hard labor, and was instead taught to read and write. She took her newfound skills to heart and published her first poem on Dec. 21, 1767. But despite her obvious intellect, she died at the young age of 30, alone and penniless.

But she hasn't been forgotten, especially by autograph collectors. On Tuesday, the Swann Auction Galleries in New York City will auction a newly discovered two-page letter written by Wheatley -- a bit of history expected to fetch $120,000 or more.

I rec.d your kind Letter of the 17th ultimo by Cato Coggeshall; had not the opportunity to see him. I doubt not that your present situation is extremely unhappy; nor that you with wonder exclaim on the proceedings of nations that are fav.d with the divine revelation of the Gospel. Even I a mere spectator am in anxious suspense concerning the fortune of this unnatural civil Contest.

Possibly the ambition & thirst of Dominion in some is design'd as the punishment of the national views of others, tho' it bears the appearance of greater Barbarity than that of the uncivilz'd

part of mankind. But Let us leave the Event to him whose wisdom alone can bring good out of Evil & he is infinitely superior to all the Craftiness of the enemies of this seemingly devoted Country. This is handed to you br Mr. Lingo, with whom I and Mr. Quamine I passed the last evening very agreeably.

Dutiful respects to Mr. Hopkins & family and believe me to be your affectionate

Read More about Wheatley and Get Details of the Auction at SwannGalleries.com