Accessibility links
A Gift in Any Language To linguist John H. McWhorter, "the magic books" are a series of self-teaching language books that work. Follow the directions, and you speak like a perfectly fluent three-year-old. For him, they're often the perfect gift.

A Gift in Any Language

A Gift in Any Language 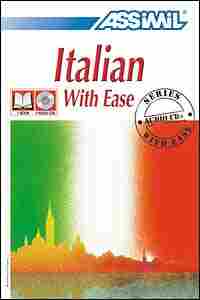 As a linguist, I get a letter or message about once a month asking me what the best way is to learn a foreign language at home. I always answer "The Magic Books," by which I mean the wonderful Assimil series. I've been giving people Assimil sets for 20 years now. It's the With Ease series you may have seen -- Russian with Ease, Dutch with Ease, and so on.

These are some of my favorite Christmas gifts because they're the only self-teachers I know that work. In just 20 minutes a day -- if you do exactly what they tell you to with the books and accompanying recordings -- then presto! You will be talking like, roughly, an unusually cosmopolitan three-year-old. No, you won't be "conversing like a native" the way the ad copy says, unless you already are one, which would presumably make one's use of the set somewhat peculiar. And, they can only give you so much vocabulary. But the magic is that you will be able to carry on a decent conversation, instead of just being able to count to 100 and say things like "My uncle is a lawyer but my aunt has a spoon."

John H. McWhorter is a regular guest on News and Notes with Ed Gordon and a commentator for All Things Considered. He is a senior Fellow at the Manhattan Institute and the author of The Power of Babel: A Natural History of Language. Hear John McWhorter on NPR:

I did the German one a long time ago, and when I got to Germany and had finished explaining to a waitress that I didn't want onions in my salad because they might make me throw up, a guy told me "You speak German better than anyone I've ever known who has only been here a week." Or, after I did the Hebrew one, an Israeli said "Hey, you can actually talk!"

Both of these faintly hedged compliments were right on the nose. Fluent? Of course not, nothing can get you there short of speaking the language all day for months. But at least I could converse sparklingly with toddlers, while faking it well with everybody else, instead of quietly hoping somebody would ask me what kind of silverware my aunt had.

The With Ease books don't get around much in the United States, actually. They're translated from French originals, and are mostly sold in the United Kingdom. But they're available online and in specialty bookstores, and they're well worth the cost. Their pages even smell good. (One caveat: Unfortunately, the Arabic one is a complete wash-out, and so avoid it.)