Accessibility links
The Hankins: Crunching the Numbers As part of the Hunger in America series, NPR's Howard Berkes traveled to Chilhowie in rural southwestern Virginia, to report on the trade-offs that Robbie and Wreatha Hankins make to keep food on the table. A look at how their food budget compares with government expectations for families at their income level.

The Hankins: Crunching the Numbers

The Hankins: Crunching the Numbers 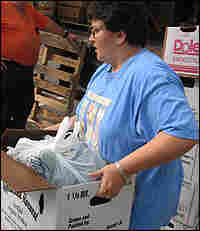 Wreatha Hankins loads a box of vegetables into a food pantry delivery truck. Wreatha and her children both help out and get help at the food pantry. Evie Stone, NPR hide caption

As part of the Hunger in America series, NPR's Howard Berkes traveled to Chilhowie, in rural southwestern Virginia, to report on the trade-offs that Robbie and Wreatha Hankins make to keep food on the table.

Last year, the Hankins, a family of five, made about $22,000. According to the Census Bureau, that's just below the poverty line. The Census Bureau reports that the median income for a family of the same size in Virginia is $71,281.

With an income three times lower than average, the Hankins have five people to feed. And like many American families, there's an endless list of other expenses. A U.S. Bureau of Labor Statistics study found that an average American family spends 13 percent of their income on food. Accordingly, this would leave the Hankins, after taxes, with $178 for their monthly food budget. That's just a little more than a dollar a day per person.

In contrast, the U.S. Department of Agriculture's most conservative suggested food budget, The Thrifty Food Plan, proposes that the Hankins should be spending at least $149 a week on food. The Living Wage project, based out of Penn State University, believes that number should be even higher. According to their formula, the Hankins should have a weekly food budget of $172.

In reality, the Hankins spent $145 on food last month ... or 96 cents a day per person. And that's a good month. After the mortgage, homeowner's insurance, utilities and car insurance, the family usually has about $80 a month to spend on everything else. When Wreatha gets work, that figure rises. In fact, she refers to her paychecks as the food money.