Accessibility links
Residents Say Levee Leaked Months Before Katrina New Orleans residents who live along the 17th Street Canal say water was leaking from the canal and into their yards months before Hurricane Katrina. Investigators say a leak may have been an early warning sign that the soil beneath the levee was unstable and may help explain why it collapsed. 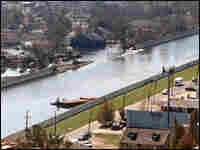 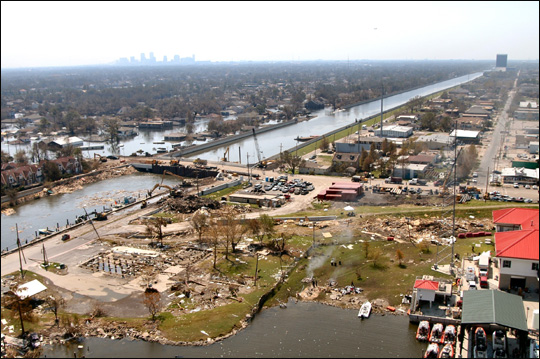 The breach in the 17th Street Canal, visible in this aerial photo taken Sept. 4, flooded much of New Orleans' Lakeview District.

Residents of New Orleans who live along the 17th Street Canal say that water was leaking from the canal and into their yards months before Hurricane Katrina caused the levee system to collapse. The leaks, they say, occurred within several hundred feet of where the levee later failed.

State and federal investigators say that a leak may have been an early warning sign that the soil beneath the levee was unstable and help explain why it collapsed. They also say if authorities had investigated and found that a leak was undermining the levee, they could have shored it up and prevented the catastrophic breach. 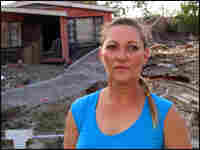 Beth LeBlanc says the city's Sewerage and Water Board sent a man to test water pooling in her front yard months before the 17th Street Canal levee collapsed. She was told the water was coming from the levee behind her house. Frank Langfitt, NPR hide caption

According to Beth LeBlanc, whose home in the city's Lakeview District abutted the levee, water began pooling in her front yard last fall. The muddy puddle grew into a pond that measured 75 feet long and 10 feet wide. LeBlanc says a couple of months later the city's Sewerage and Water Board sent a worker to conduct environmental testing.

When the New Orleans levee system collapsed, one of the major breaks came along the city's 17th Street Canal. In recent interviews, neighbors say that, months earlier, canal water was leaking through the levee — within several hundred feet of where it later failed:

November 2004: A puddle emerges in Beth LeBlanc's front yard. Her house backs up to the levee that holds back the 17th Street Canal.

Feb. 8, 2005: Sewerage and Water Board workers dig up the property, but can't find where the water is coming from. Work order reads: "Found running water in trench. Found no leak. Need environmental to find source of problem."

LeBlanc says that soon afterward, the Sewerage and Water Board sent a man to the site, who told her the water was coming from the levee.

"He said, 'It looks like levee water to me,'" LeBlanc says. 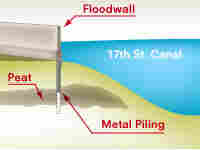 Investigators believe the 17th Street Canal floodwall collapsed because water pushed through a soft layer of peat underneath it. hide caption

Work orders confirm that the Sewerage and Water Board visited the property a number of times in February 2005 to see if the puddle was coming from a water main break. One document dated Feb. 8 reads: "Found running water in trench. Found no leak. Need environmental to find source of problem."

The water spilled over into the yard of LeBlanc's neighbor, Peter Marcello. He says that around that time, LeBlanc told him a man sent by the Sewerage and Water Board said the water was coming from the levee.

NPR has repeatedly asked the Sewerage Board to provide any water tests from LeBlanc's property. But after nearly two weeks, the board has not produced any record or explained the source of the water.

Ivor Van Heerden, deputy director of the Hurricane Center at Louisiana State University, leads a state team investigating the levees' collapse. He says a leak is a red flag that should be investigated immediately. He also says the neighbors' account could be a major clue in explaining why the levee collapsed.

"This is very, very significant," Van Heerden says. "These poor folks had these seeps, and it was indicative that the water was already getting under the system and weakening the system."

NPR also discussed the case with three civil engineers who belong to separate teams investigating the collapse of the levees. All had similar concerns.

The Army Corps of Engineers and the Orleans Levee District share responsibility for inspecting the levees. Both say they never received information about a leak at the site.