Accessibility links
Dan Savage on 'The Commitment' Host Steve Inskeep talks to Dan Savage, sex columnist and author of The Commitment, a book about gay marriage. Savage describes his own decision to marry his partner, and how his young son has brought a kid's perspective to the debate.

Listen
Dan Savage on 'The Commitment'

Host Steve Inskeep talks to Dan Savage, sex columnist and author of The Commitment, a book about gay marriage. Savage describes his own decision to marry his partner, and how his young son has brought a kid's perspective to the debate. 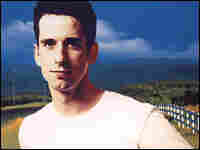 Detail from the cover of Dan Savage's The Commitment. hide caption

The writer Dan Savage says he never wanted to marry his boyfriend until people started denouncing gay marriage. Then he and his partner gave it another thought.

INSKEEP: Dan Savage made his name as the writer of "Savage Love," which is a syndicated sex column. His latest book, which is titled "The Commitment" explores his own personal life which, as he describes it, is a good deal less exciting than the column. Savage has had the same partner for a decade. They adopted a son named DJ. He's seven years old now. Savage and his partner Terry were among the millions who followed last year's political debates over gay marriage.

Mr. SAVAGE: The issue is constantly being raised. And we would be sitting there listening to the radio, and then we would realize that DJ was sitting there in his pajamas listening, too, while eating his breakfast and hearing his parents' relationship described as a threat to all things decent and good. And, you know, we would reach over and snap off the radio real quick. It was really unavoidable, and we had been trying to avoid it. And I think part of what's going on, certainly what was going on for my boyfriend and I, is there was this deep sense of ambivalence about not just the institution but sort of revisiting a decision you made long ago. I'm 40, and I came out when I was 15. And so 25 years ago when you came out, you were not only telling your parents, `Oh, I want to kiss boys'; you were also making some profound choices that you thought were going to be lifelong. You were saying to your family, `I am never going to get married. I am never going to have kids.' And for a lot of gay people I think over 30, it's kind of a shock to the system. It's not necessarily welcome.

INSKEEP: You tried to turn off the radio and make sure that your son DJ didn't hear about the gay marriage debate, but your son had an opinion about gay marriage, didn't he?

Mr. SAVAGE: He was opposed. It wasn't that we tried to shield him from the debate. We just tried to shield him from the more toxic comments about gay people being, as James Dobson said, `a threat to the survival of the planet.' But he was opposed for really interesting sort of kid logic reasons. School is very conformist, and one of the very first conforming that goes on in preschool and kindergarten is gender. Suddenly things that he always liked he became to understand them as not just things he liked but as things he liked because he was a boy. They were boy things. And the whole world got divided into boy things and girl things, and marriage was a girl thing. Marriage, as DJ understood it at five and six, was nuclear cooties. It was something that the girls threatened to do to the boys. I mean, it wasn't a pleasant thing.

INSKEEP: Do you think he was more confused or more challenged by those kinds of issues because he had gay parents at home?

Mr. SAVAGE: Yeah, I do, and I guess you're not supposed to say that if you're gay. You're supposed to say, `Oh, it's just the same.' No, it's a little different. One of the things that the book is about is DJ coming to understand what gay is and what love is and how love works and how sexual orientation works in an age-appropriate way. You know, for a while, he thought being gay meant you get to live with your best friend when you grow up. And we had to sort of work through what the difference is between just living with your best friend and living with someone you're in love with.

One of the things that I write about in the book which is a little explosive is one day DJ announces in the middle of the night when he has an earache and he and I are up late that he wants to be gay when he grows up, like us, like his fathers, and that is, for a lot of opponents of same-sex parenting, one of the big reasons, one of the big things that bothers them or that they point to is that children will want to emulate their parents in their sexuality. That most gay people have straight parents and we didn't emulate our parents is sort of ignored. It's not a choice that you get to make. It's a choice, as DJ comes to understand, that your heart makes. And that's a lot of where the book goes and how he comes to understand what gay marriage is.

Mr. SAVAGE: I don't like to think of it as we brought him on board. I think he got on board. DJ assumed this posture in gay marriage where he had a critique and where he had a correction, and that was for him kind of empowering and for him a way to, I think, initiate conversations about something he didn't understand and was uncomfortable with and in a way to get to a place where did understand it and was more comfortable with it.

Some friends of his when their parents are getting divorced, he understood that one day Terry and I could stop being together, and that unnerved him. All kids understand a promise, and when he realized that marriage was a promise that you made to stay related, that became more valuable to him as he saw some families coming apart and he wanted his family to stay together forever.

INSKEEP: So you're married.

Mr. SAVAGE: Yeah, although it's funny. I still call my partner my boyfriend and my son now corrects me when I say it. He goes, `Dad, husband.'

INSKEEP: Well, how did you get from being totally uninterested in that ceremony to actually attending one?

Mr. SAVAGE: As the guest of honor.

Mr. SAVAGE: We made a mad dash to Canada. We actually, up until the week before our 10th anniversary party, were still hemming and hawing and probably not going to do it, and then my mother sat us both down and read us the marriage riot act. And we decided to head up to Canada the day before our big anniversary party, and so unfamiliar is the ritual to us that we were on our way and we didn't have rings. And it didn't occur to us that we needed rings to get married. And the woman who performed the ceremony called us, `Be sure to bring rings.' And we freaked out. We didn't know what to do. So we pulled off the road on our way out of Seattle and found this little rocker jewelry store where you could get a couple of, like, cheep silver bands 'cause we didn't think we would wear them after the ceremony for very long. And we went in and DJ decided he was going to pick out the rings, and so he picked out these rings with skulls on them. They were...

INSKEEP: Your son picked out the rings?

Mr. SAVAGE: Yeah. And I was appalled. I'm not a rocker, and I didn't want to wear this ring. And we were, like, `Deej, like, what about these rings? What about these simple ones?' He said, `Dad, don't you understand you're going to get married? That means you have to stay together till you die.' And we figured, `Ah, what the hell, we're never going to wear these rings after today,' and almost a year later, I'm still wearing this big clunky rocker skull ring on my finger everywhere I go. I feel ridiculous.

INSKEEP: Dan Savage is the author of "The Commitment." Thanks very much.

Mr. SAVAGE: Thank you for having me.