Accessibility links
To Generate Buzz, Clap Your Hands on the 'Net! Clap Your Hands Say Yeah! is but one of scores of bands making music without the help a record label, pressing CDs themselves and selling them at concerts and on the Internet.

Listen
To Generate Buzz, Clap Your Hands on the 'Net!

Rock group Clap Your Hands Say Yeah! became all the rage thanks to a string of postings on the Internet. Jasper Coolidge hide caption 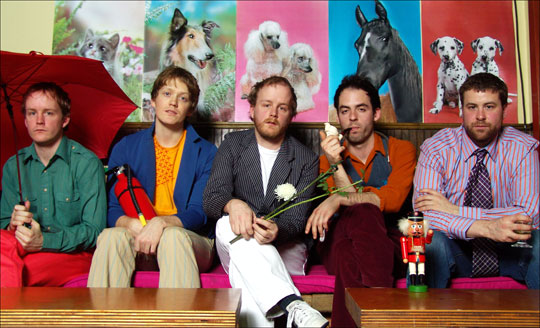 Rock group Clap Your Hands Say Yeah! became all the rage thanks to a string of postings on the Internet. 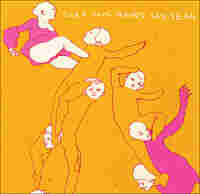 HOW 'CLAP' GOT NOTICED

Read the trail of blog postings that created all the buzz for 'Clap Your Hands Say Yeah!'

June 9: Dan Bierne writes about the band on his MP3 blog.
June 14: Pitchfork Media posts a review of the song "In This Home On Ice."
June 15: Blogger Gothamist posts an interview with the band.
June 20: Blogger Stereogum announces the band's show at the Knitting Factory.
June 21: Gothamist reports that David Bowie was in the audience at the Knitting Factory show.
June 22: Pitchfork posts one of a slew of reviews of Clap's first album.

LISTEN TO THE NEW ALBUM

Details of the War

In This Home of Ice

Listen to more 'Clap Your Hands' cuts on All Songs Considered

Musicians looking for a break are increasingly turning away from conventional forms of promotion and toward the more populist venue of the Internet. MP3 blogs, Web-based music magazines, and online record stores all offer small-time bands a chance to reach a wider audience.

Over two weeks this past June, all of those forces mobilized to support a group called Clap Your Hands Say Yeah!, a five-piece rock combo based in New York and Philadelphia. It was one of scores of bands making music without the help of a record label, pressing CDs themselves and selling them at concerts and on the Internet.

Such musicians are lucky if they draw the attention of an MP3 blogger like Dan Beirne, who -– as luck would have it -- came across the group's unusual name while trolling a file-sharing Web site on the Internet.

"Their name both attracted me and repulsed me at the same time," says Beirne, who writes a column at www.saidthegramophone.com. "So I just had to find out what it was."

What he heard was a track from the band's self-titled debut. "I just listened to it nonstop and then posted it in the next couple of days," he recalls.

Beirne's post hit the Web on June 9, the very same day the band played a record release party in New York City. Soon after, other blogs started making noise about the band.

Then the music Web site Pitchforkmedia.com com took notice. Pitchfork is a dominant force in the indie-rock world. The site is widely credited with launching last year's indie faves the Arcade Fire.

In the coming days, still more music Web sites took notice. Then, after Clap Your Hands Say Yeah! played a concert in New York City, two Web sites reported that rock icon David Bowie had been in the audience.

That set off another wave of Internet buzz that helped launch the group's career.