Accessibility links
Organic Farmers Divided over Synthetics Organic foods are mainstream... an established and fast-growing sector of the food business. But synthetic substances are creeping into food that is branded "organic," and the issue has split growers. 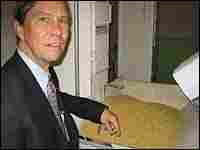 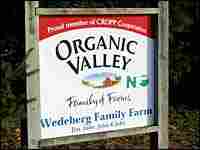 Organic foods, once specialty items found in co-ops and health food stores, have long since entered the mainstream. What started as a movement is now an established and fast-growing sector of the food business.

All of this change is creating tensions and rifts, most recently over how many synthetics can be used in food labeled "organic." Earlier this year, a federal court ruling severely limited the use of synthetic substances in organic food. But then Congress stepped in, adding a rider to an agriculture spending bill that allowed organic food makers to resume using a long list of synthetics.

But some, such as George Siemon of the Organic Valley farm co-op in Wisconsin, believe that the ruling threatened the industry's continued growth. Others, such as Eden Foods CEO Michael Potter, believe Congress' move is bad for organic businesses and consumers.

With nearly 40 percent of Americans now buying organic food, and sales projected to reach $30 billion by 2007, clearly there's a lot riding on what exactly the label "organic" means.