Accessibility links
Housing Costs Play Role in Urban Hunger In Oakland, Calif., hunger shows up where it's least expected: in upscale Oakland Hills, where Brian Donaldson and his wife, Tina, share an apartment that some would call luxurious. But at 52, Donaldson is jobless and his skills are outdated. 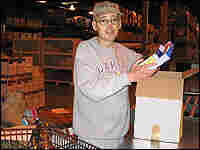 At 52, Brian Donaldson has poor health and outdated job skills. But he found a novel solution to keep food on the table: He volunteers at a local food bank. Elaine Korry, NPR hide caption

In Oakland, Calif., you can find hunger in all the usual places: government housing projects and rundown boarding homes. But it also shows up where you'd least expect it: in upscale Oakland Hills. That's where Brian Donaldson and his wife, Tina, share an apartment that some would call luxurious; it's even equipped with a private gym.

Inside the Donaldsons' Budget

The Donaldsons are living nearly $7,000 above the federal poverty threshold, and yet they're struggling to put food on the table. A look at how their dilemma reflects the deeper issue of how to adequately measure poverty. Nov. 23, 2005

Hunger By the Numbers

The federal government classifies a family as "food insecure" if at some point during the year the household had difficulty buying enough food. A look at the numbers on food insecurity:

Proportion of U.S. households defined as "food insecure" with income at or below the federal poverty threshold: 40 percent (1)

Number of Americans defined as "the working poor" (at least 6 months in the labor force with incomes below the federal poverty threshold): 7.4 million (3)

But, these days Donaldson rarely has the strength. He's ill with chronic digestion problems and it shows in his sunken eyes and gaunt, pale cheeks. He's down to 100 pounds.

Donaldson has been in and out of hospitals for years. He takes medication and washes down dozens of vitamins each day, but he still has severe stomach cramps and constant diarrhea. He's disabled, a far cry from his life a few years ago.

Donaldson was born in southern California, but he lived in Scotland as a boy. He returned to California for college, and for most of his adult life, he worked in Silicon Valley as a software engineer. He could afford the rent in this gated apartment complex -- until he was laid off, collateral damage in the dot-com bust.

He's 52, his health is poor and his skills are outdated. His savings have vanished, and without medical insurance, Donaldson has racked up huge medical bills. Yet he doesn't even qualify for food stamps. His monthly disability check -- about $1,650 -- puts him over the income limit. Housing is his biggest problem, with 80 percent of his check going to his $1,320 monthly rent.

According to the real estate agency Bay Rentals, a dirt-cheap apartment in Oakland runs about $1,000, and a family of four needs nearly $70,000 annually to live comfortably. But, according to census data, the median income is only $41,000. Donaldson would gladly move out of the city to someplace cheaper -- if only he could.

"Move where?" he asks. "Who is going to rent me an apartment? I've been unemployed for over two years, my credit report looks like a news report from Baghdad. Nobody will rent to me."

Brian and Tina Donaldson are stuck. His monthly check doesn't stretch far enough for groceries. He can't eat at a soup kitchen because of his health problems. So Donaldson had to find a novel solution to keep food on the table -- and he has.

Donaldson volunteers at a community food bank. It's a giant warehouse where forklifts move pallets of cereal, dry milk, canned fruits and vegetables -- the stock-in-trade of food pantries such as the St. Vincent de Paul Society. Donaldson spends a few days per week here, packing up boxes with a week's worth of staples.

Because of his illness, Donaldson follows a strict gluten-free diet. That means no bread or pasta, but also no canned soup -- the staple of hungry people everywhere. No bottled salad dressing or packaged rice. No ice cream, either.

Since Donaldson can't eat at a food pantry, he's worked out an exchange: He volunteers his labor and gets to hand-pick a weekly supply of rations from the food bank.

Donaldson's wife, Tina, a young woman with high cheekbones and straight black hair, is the picture of health. Tina met her future husband on the Internet, and then emigrated to the U.S. from Kazakhstan. When they married nearly three years ago, the future looked good. Within a month, Brian Donaldson lost his job, and things went downhill from there. But she tries to keep their spirits high.

"We can't predict our future," she says. "Things didn't work out the way I expected, actually. But it's happened and so we should move on, be enthusiastic, never be upset, and survive."

Before she became unemployed, Tina made sure she and her husband ate well -- natural foods and organic produce. They avoided the sugary, high-fat foods that cause obesity or diabetes. Now they have to settle for what they can get. Her meager unemployment benefits are about to run out, which means even less money to live on. But ironically, that may be just the kind of setback that qualifies the Donaldson's for food stamps.

Brian Donaldson was not born in California. He was born in Camden, N.J.