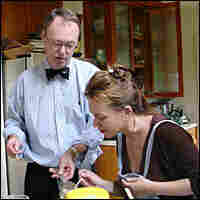 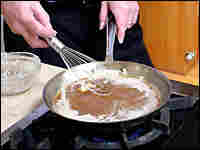 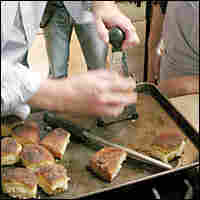 It could happen to you. Friends and relatives are traveling over the river and through woods to your house for Thanksgiving. You started cooking well before dawn, and just as your culinary masterpiece is taking shape: disaster.

The biscuits are burned, the gravy is gritty and the turkey is in trouble.

That's where Christopher Kimball can help. He is the creator of Cook's Illustrated Magazine and hosts the PBS television show America's Test Kitchen.

Kimball dropped by Renee Montagne's own kitchen to dispense hands-on tips on how to recover from cooking disaster during the holdiday.

Here are some of his suggestions:

Use a Microplane zester, or some other type of grater, to shave off the burned bits.

Wrap in several layers of foil and put into a paper grocery bag. Holds for 30 minutes.

Make them a few hours in advance and keep them warm in a slow cooker.

Place nuts in a freezer bag on a cutting board and whack with the bottom of a small saucepan.

Place in a blender or strain.

--Toss with a vinaigrette.

Have to Transport a Pie?

Use a clean 10-inch pizza box or place a damp kitchen towel or a non-skid rubber shelf liner in a roasting pan.

How to Avoid a Cracked, Dry Pumpkin Pie

The trick is to remove the pie from the oven when the center is still wobbly. Bake until filling is puffed, dry-looking and lightly cracked around edges. The center should wiggle like gelatin when pie is gently shaken.

Help! The Turkey Is Still Frozen!

It's best to defrost a whole turkey in the refrigerator, figuring one day of defrosting for every 4 pounds of turkey.

If you find yourself with a still-frozen turkey on Thanksgiving morning, place the turkey, still in its original wrapper, in a bucket of cold water for 30 minutes per pound. Make sure to change the water every half hour to guard against bacterial growth.

Or, you could unwrap the bird, remove the giblets, and place it in a sink of cold water. Change the water every 30 minutes.

Now, if you have a bird that has been injected, such as a frozen Butterball, you can roast it in only 90 minutes! Butterfly it (remove the backbone and press flat), put it on a broiler pan, and roast it at 450 degrees for 90 minutes. This works for a 12- to 14-pound bird.

The worst, most disaster-provoking recipe directive is the one that says, "add just enough water so that the pie dough holds together."

The truth is, add plenty of water so that the dough easily holds together (and is actually a bit wet). If your dough is already dry and falls apart, place dough in a bowl, add a bit of water, dust with flour, shape into a four or five-inch circle, wrap in plastic, and let sit in the freezer for 15 minutes.