Accessibility links
Chasing Down History and the 'Thieves of Baghdad' After the American invasion of 2003, Looters took advantage of the Iraqi government's collapse to steal priceless antiquities in the Iraq Museum. The new book Thieves of Baghdad chronicles efforts to recover the stolen art.

Listen
Chasing Down History and the 'Thieves of Baghdad' 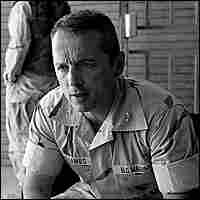 Author Matthew Bogdanos is a Marine colonel and a New York City prosecutor. A reservist, he has served in Afghanistan and Iraq in recent years. Ozier Muhammad/New York Times hide caption 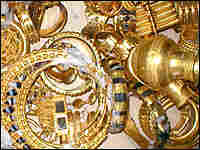 The gold of Nimrud is a collection of more than 1,000 pieces of gold jewelry and precious stones from the eighth and ninth centuries B.C. Matthew Bogdanos hide caption 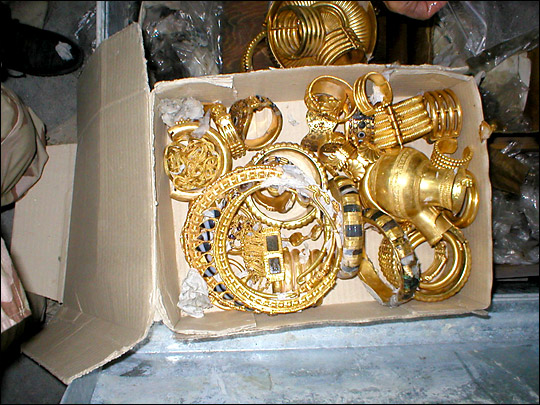 The gold of Nimrud is a collection of more than 1,000 pieces of gold jewelry and precious stones from the eighth and ninth centuries B.C. 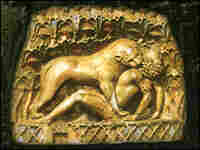 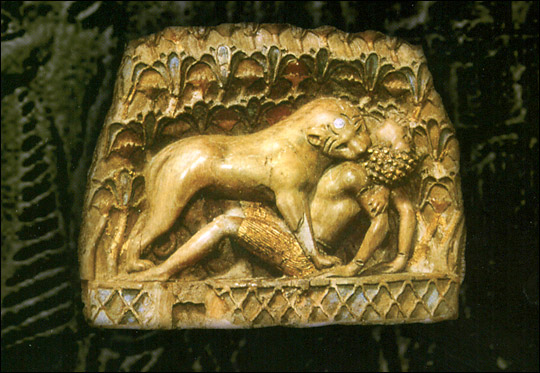 Still missing is Lioness Attacking a Nubian, an extraordinary eighth-century B.C. ivory plaque inlaid with lapis and carnelian and overlaid with gold.

Treasure in the Basement

In this extended clip from Renee Montagne's interview with Matthew Bogdanos, he describes the efforts of thieves to remove treasures from the basement of Iraq's national museum. 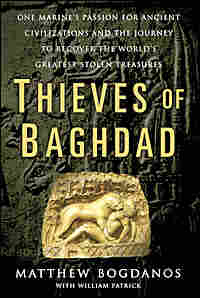 After the American invasion of 2003, looters took advantage of the Iraqi government's collapse to steal priceless antiquities from the Iraq Museum. Artifacts representing some of mankind's earliest attempts at building a civilization disapeared into the shadowy world of the international black market for art.

That's where Matthew Bogdanos comes in. He is a Marine reservist, an assistant district attorney in Manhattan and a student of the classics. Called to active duty for the conflict in Iraq, he quickly realized that he had a role to play in saving a significant chunk of Iraq's cultural heritage.

Now he's written a book -- Thieves of Baghdad -- about his adventures recovering stolen art in the chaotic world of post-war Baghdad.

Although many historical artifacts have vanished, quite a few have not. Here are some of the pieces that Bogdanos and his team recovered, as well as some that are still missing:

The Gold of Nimrud: A spectacular collection of more than 1,000 pieces of gold jewelry and precious stones from the eighth and ninth centuries B.C. Some of the finest examples of gold jewelry ever found in the Near East, their discovery by archaeologists in 1988 is on par with the discovery of the tomb of Tutankhamen. The Nimrud Treasure is considered so priceless that an exhibition of them planned in Germany several years ago had to be cancelled because no insurance company was willing to insure it. An internationally touring exhibit of the art, including five American cities, is scheduled for 2006.

The Sacred Vase of Warka: The world's oldest known carved-stone ritual vessel, dating from circa 3200 B.C., and the pride of the Iraq Museum. It was returned to the museum in the trunk of a car, along with 95 other artifacts.

The Mask of Warka: Generally believed to be the world's oldest known naturalistic sculpture of a human face, from circa 3100 B.C. Bogdanos and his team conducted a raid on a farmhouse near Baghdad and found the Mask of Warka buried in the backyard.

Golden Harp of Ur: In the wake of looting, the solid gold bull's head that adorned the harp was believed missing and the harp destroyed. These treasures date from circa 2600-2500 B.C.

The Bassetki Statue: Cast in pure copper, it is one of the earliest known examples of the lost-wax technique of casting. Dates from circa 2250 B.C. Recovered during a raid, submerged in a cesspool behind a smuggler's warehouse.

Clay Pot from Tell Hassuna: Fashioned in the sixth millennium B.C., this beautiful pot predates the wheel by at least 1,500 years. It was returned to the museum in a garbage bag.

4,000-Year-Old Akkadian Piece: The amnesty program established by Bogdanos to encourage return of the stolen pieces was so well publicized that, while home on leave in Manhattan in late summer 2003, Bogdanos was contacted by an individual who had learned of the investigation on the news and had a "package" for him. They met in a crowded coffee shop in Midtown Manhattan, where Bogdanos was handed a small brown-paper envelope with a 4,000-year-old Akkadian piece, now back in the Iraq Museum.

Lioness Attacking a Nubian: An extraordinary eighth-century B.C. ivory plaque inlaid with lapis and carnelian and overlaid with gold. Two such ivory plaques are known to exist, with the other being in the British Museum.

Ninhursag Bulls: One of the two twin bulls from the face of the temple built by the King of Ur, circa 2475, is still missing. Among the oldest known bulls in relief, they were ripped from the walls of the museum. The other was recovered.

Read an excerpt from Chapter 14 of Thieves of Baghdad:

Five thousand years ago, even mundane, commercial objects such as cylinder seals could be exquisitely handcrafted works of art. Other antiquities, such as votive statues, fertility goddesses, and small figurines meant to aid in childbirth, were, in fact, prayers in clay. As you look at these artifacts, you can see these ancient craftsmen trying to probe great mysteries. Today, when free markets are revered above all else, these sacred objects are bought and sold-and too often stolen-like stripped out auto parts. In 1997, McGuire Gibson noted, "In one Bond Street shop, I was shown a bag of more than a hundred cylinder seals and received an apology because these were the poorer quality ones; I was told that the best items had been sold to Japanese and Taiwanese collectors a day or two before."

There are many players in the stolen-antiquities trade. And like the infamous "molasses to rum to slaves" trade of the eighteenth century, it could not exist without the active complicity of otherwise respectable society. While the first two components -- the thieves and smugglers -- make no bones about what they do, the last two in this chain -- the dealer and the collector -- often engage in self-deception of the highest order. But it is the even more covert and painstakingly rationalized participation of academics in the middle that makes this all possible.

Before anyone, collector or museum, pays for a stolen antiquity, it must first be authenticated as genuine, for a price, by an expert curator, dealer, or professor. The price, surprisingly, is not always money. Sometimes it is access to an item that no one else has ever seen or critically examined before. In some cases, it is the ability to publish a new finding that attracts the scholar, and for some, the allure appears to be overwhelming. The more valuable the item, the more visible the "name" necessary to assure the buyer that he's getting his money's worth. If you are going to spend a million dollars on a small statue, you are not going to be satisfied with the guarantees of a graduate student. You want the full professor or the head of an institute.

Dealers are just as necessary. In many cases, socially connected Madison Avenue and Bond Street dealers-the vital link between the smuggler and the collector-have made the sale before the theft. There are many more who would never sponsor a heist, but, like Pontius Pilate, know how to "wash their hands" of unpleasant realities. These facilitators who believe they are engaged in benign criminal activity (an oxymoron of the highest order) might be "shocked" to discover that they are helping finance the drug trade, as well as international terrorism. Smugglers don't care whether the cargo is drugs, weapons, or antiquities -- they get paid for their ability to evade the law. And at least during the first leg of the journey out of Iraq, antiquities and weapons often travel together. We almost never recovered an antiquity without recovering weapons as well.

Antiquities smuggling is also helping to fund the insurgency in Iraq. In a series of simultaneous raids on a terrorist hideaway in the first three days of June 2005, north of Karmah in al-Anbar province in northwest Iraq, Marines operating alongside Iraqi security forces arrested five terrorists in their underground bunkers. The bunkers were filled with automatic weapons, ammunition stockpiles, black uniforms, ski masks, compasses, night-vision goggles, and a chest of more than thirty artifacts that had been stolen from the Iraq Museum. You connect the dots.

We need to get the community of scholars, museum directors, dealers, and collectors to stop kidding themselves and, like our undercover archaeologist in London, to lend a hand.

Antiquities list and excerpt from Thieves of Baghdad reprinted with the permission of Bloomsbury Publishing. 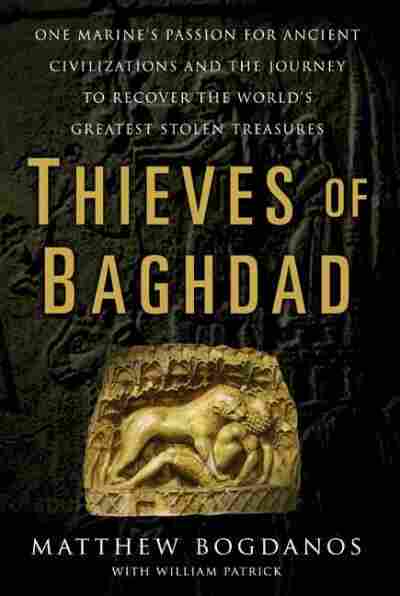 by Matthew Bogdanos and William Patrick