Accessibility links
Prewar Iraq Intelligence: A Look at the Facts Critics of President Bush say he misled the nation. In speeches, the president and Vice President Dick Cheney now accuse their critics of rewriting history. We check the facts with a pair of reporters who covered some of that history.

Listen
Prewar Iraq Intelligence: A Look at the Facts 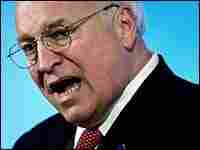 Over the past few weeks, the nation's capital has been consumed by an increasingly intense debate over the Bush administration's reasons for going to war in Iraq.

Some critics say the president and other senior officials misled Congress and the public as they built the case for war. The administration has disputed those charges aggressively, arguing that critics in Congress are merely looking for ways to justify their votes for a war that's proving much more difficult than first thought.

"While it's perfectly legitimate to criticize my decision or the conduct of the war, it is deeply irresponsible to rewrite the history of how that war began," President Bush said at a speech on Veterans Day.

The real history, according to the president, is that Iraq was a threat that had to be confronted in a post-Sept. 11 world, and that both parties accepted the administration's case for war. One key element of that case was the suggestion that Saddam Hussein had -- or would soon have -- the deadliest weapons imaginable.

In the fall and winter of 2002, the president and other top administration officials used stark language to help Americans imagine the dangers. "Facing clear evidence of peril, we cannot wait for the final proof -- the smoking gun -- that could come in the form of a mushroom cloud," Mr. Bush said in his State of the Union address in January 2003.

Outside the administration, there was widespread belief that Iraq possessed biological and chemical weapons, but less confidence on the nuclear question. The U.S. intelligence community was deeply divided over the issue. And, despite months of searching, U.N. inspectors -- both before and after the invasion -- failed to find any weapons of mass destruction.

That was no surprise to Hans Blix, the U.N.'s chief weapons inspector for Iraq. "I said to Condoleezza Rice that we were not impressed by the intelligence," Blix recalled in an interview with NPR. "I remember she said, 'Intelligence is never 100 percent. But it is not the intelligence that is indicted. It is the Iraqis who are.'"

The administration tried to bolster its case by making a connection between Iraq and al Qaeda, which implied a connection to the Sept. 11 attacks. "We've learned that Iraq has trained al Qaeda members in bomb-making and poisons and deadly gases," Mr. Bush said in a October 2002, speech, his first major prime-time talk to help build public backing for a still unannounced war.

The new information came from a captured al Qaeda operative named Ibn al-Shaykh al-Libi. But eight months before President Bush made that speech, the Defense Intelligence Agency issued a report saying that information from Al-Libi could not to be trusted. Other informants were also ultimately discredited.

Take the case of a man codenamed "Curveball," an Iraqi who defected to Germany in 1999 and lived under the control of that country's intelligence service. When Secretary of State Colin Powell went to the United Nations in February of 2003 -- six weeks before the war began -- some of the key elements in his controversial presentation were the result of information provided by "Curveball."

"My colleagues, every statement I make today is backed up by sources, solid sources," Powell told the U.N. gathering. "These are not assertions. What we are giving you are facts and conclusions based on solid intelligence."

Powell told the U.N. Security Council that Iraq had mobile labs that could produce anthrax and other deadly germs, enough to kill many thousands of people. At the time, Lawrence Wilkerson was Powell's chief of staff. He says Powell went to then-CIA Director George Tenet in advance to make sure everything in that presentation was accurate. "I remember being in that room with Secretary Powell and George Tenet, and I remember vividly the secretary turning to George and saying 'George, you stand by this? Right?'" recalls Wilkerson. He says the CIA director responded, "Yes."

But "Curveball" was not a credible source. The Los Angeles Times, in a story this week, reports that the CIA knew the informant was unstable and that he provided fabricated intelligence. U.S. officials had no direct access to him.

David Kay, a former U.S. weapon inspector, was astounded that the government used the type of flimsy intelligence provided by "Curveball" as a basis for war. "I was flabbergasted when I discovered that we'd had the secretary of state lay this story out, and yet no American official had ever talked to this individual or even been able to directly interrogate him as to what his views are and how he knew what he claimed to know," says Kay.

Finger-Pointing Begins After WMDs Not Found

Slowly, in the months after the war, the absolute certainty the administration displayed going into the war began to dissolve, as neither al Qaeda links nor weapons of mass destruction were found.

George Tenet, former CIA director, was left trying to explain what went wrong. "The question being asked about Iraq in the starkest terms is: Were we right or were we wrong?" Tenet said later. "In the intelligence business, you are almost never completely wrong or completely right."

All of this has contributed to the credibility problems the administration is dealing with today on the issue of the war. A recent NBC/Wall Street Journal poll says that 57 percent of Americans believe that the president misled them in making the case for war. Some critics say the administration manipulated intelligence outright, focusing only on things that supported its position while burying conflicting data.

Vice President Cheney has called such allegations reprehensible. The president has answered such charges by citing a pair of investigations into prewar intelligence.

"These critics are fully aware that a bipartisan Senate investigation found no evidence of political pressure to change the intelligence community's judgments related to Iraq's weapons programs," President Bush said earlier this month.

But neither of those two bipartisan investigations were asked to probe how the intelligence was presented to the public -- and to Congress -- or to question whether someone in the government exaggerated the threat posed by Iraq.

Did Critics See the Same Intelligence?

For his part, President Bush claims that Democrats examined the evidence before the war. "They looked at the same intelligence I did, and they voted -- many of them voted -- to support the decision I made," said the president.

That is a claim made by many administration officials in the past two weeks -- that everyone saw the same intelligence. But former Sen. Bob Graham, who is also a former chairman of the Senate Intelligence committee, disagrees. Graham notes that members of Congress do not have access to the President's Daily Brief, a highly classified document containing specific and contextual intelligence. And he says he was stunned to find that in the run-up to the war, the president did not order a National Intelligence Estimate regarding Iraq, despite the fact that the Senate Intelligence Committee demanded that one be drawn up.

When the document was finally prepared, "what we got was a document that was slanted towards 'yes, there were weapons of mass destruction at 550 sites in Iraq,'" says Graham, who claims that Congress did not have access to anywhere near the amount of raw data that the president did. The quality of that intelligence is now a major part of the fight between the White House and Democrats on the Hill. The administration clearly perceives this fight as a threat to its credibility, a threat that it must answer in no uncertain terms.

As is often the case in such situations, Vice President Cheney has emerged as the leading figure as the White House fights back. "A few politicians are suggesting these brave Americans were sent into battle for a deliberate falsehood," Cheney said earlier this week. "This is revisionism of the most corrupt and shameless variety. It has no place anywhere in American politics, much less in the United States Senate."

But critics say Congress is exactly where these things should be discussed.