Accessibility links
Sunni Leader Slain by Attackers in Iraqi Uniforms Attackers, reportedly dressed in Iraqi uniforms, kill a well-known Sunni Muslim tribal leader and several of his relatives. The Shiite-controlled government says its forces weren't involved in the deaths, which prompted an angry protest at a Sunni mosque.

Attackers, reportedly dressed in Iraqi uniforms, kill a well-known Sunni Muslim tribal leader and several of his relatives. The Shiite-controlled government says its forces weren't involved in the deaths, which prompted an angry protest at a Sunni mosque. 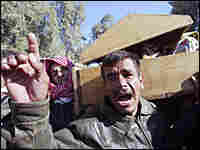 And we'll begin this hour with Iraq. Sectarian tensions flared up again three weeks ahead of crucial parliamentary elections. There's also a report that the US may begin withdrawing troops next year. More on that Pentagon plan in a few minutes. First, today's news from Baghdad. A 70-year-old Sunni Muslim tribal leader was murdered in his home, along with several of his relatives. The killers wore Iraqi army uniforms, prompting an angry protest at a Sunni mosque. The government says its forces were not involved and is struggling to keep the focus on the largely Sunni insurgency. NPR's Peter Kenyon reports from Baghdad.

At the Uma Kora mosque(ph) today, grief mingled with rage as surviving family members brought Sheik Khadim Sarhid al-Hemaiyem's body into the courtyard, along with the corpses of three of his sons and a son-in-law.

KENYON: Relatives said a group of gunmen wearing Iraqi national guard uniforms burst into the sheik's house before dawn and shot the men to death while they slept.

KENYON: One of the sheik's cousins, Ibrahim Abdul Mulin(ph), said the sheik's oldest son had been killed in an earlier attack. He had no doubt the killers this time were renegade army men.

Mr. IBRAHIM ABDUL MULIN: (Through Translator) All of them had military equipment. Who else could go out in the streets at this time of night? This is not a government. They are a bunch of terrorists. Where did they get these people from?

KENYON: Iraqi Interior Ministry officials denied any involvement in the killings, saying it was most likely insurgents with stolen Iraqi uniforms, which they say can be bought without difficulty.

The killing throws more fuel onto a conflagration of sectarian tension, insurgent violent and general lawlessness. Sunni Muslims believe the Shiite-dominated security forces are carrying out revenge attacks. The Shiites say many Sunnis with ties to the insurgency are doing nothing to stop their bloody assaults. Meanwhile, ordinary Iraqis continue to live in fear. In the northern city of Kirkuk yesterday, nearly two dozen Iraqis were killed in a coordinated attack culminating in a suicide car bombing. In Baghdad's Sadr City neighborhood today, gunmen attacked the Communist Party office and killed two people.

The US military says it's been winning the fight against the insurgency and provided figures today to quantify that claim. Major General Rick Lynch said in the past two months, US and Iraqi forces in western Iraq have killed more than 700 suspected insurgents and detained some 1,500 more. Lynch characterized the recent series of operations as very successful. Residents and doctors in the largely Sunni Al Anbar province said US air strikes killed a large number of civilians. The US military insists it takes many steps to minimize civilian casualties. Lynch said the sprawling western desert would never have a perfect security environment, but he said Anbar province is safer now than it was before the operations began.

Those operations have now moved to the volatile Anbar provincial capital, Ramadi. It's the third operation there in a week, as US forces begin to shift Iraqi soldiers into more prominent roles in the assaults. Peter Kenyon, NPR News, Baghdad.