Accessibility links
Chinese Chemical Spill Moves Toward Russia As a chemical spill in the Songhua River heads toward Russia's Far East, the nearly 4 million people of Harbin, China, do without running water for a fourth day. The BBC's Louisa Lim tells Scott Simon that Chinese newspapers are criticizing the central government's slow response to the disaster.

As a chemical spill in the Songhua River heads toward Russia's Far East, the nearly 4 million people of Harbin, China, do without running water for a fourth day. The BBC's Louisa Lim tells Scott Simon that Chinese newspapers are criticizing the central government's slow response to the disaster. 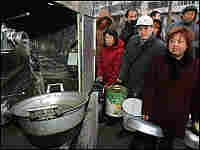 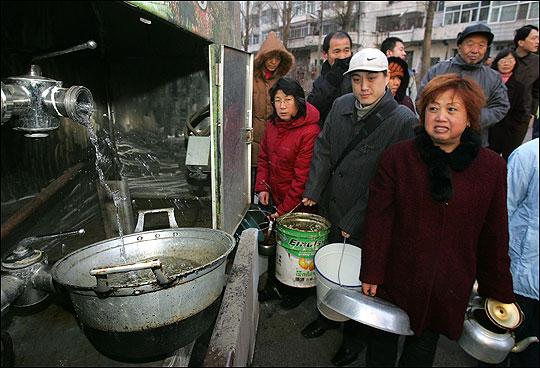 Local residents get water from a water delivery truck on Saturday in Harbin, northeast China.

Nearly four million residents of Harbin, China, have gone without running water for four days now, but the Chinese government says the taps will be turned on late Sunday. A 50-mile slick of toxic chemicals in the Songhua River has compromised Harbin's water supply in the northeastern reaches of China. The result of an initially unreported explosion at a petrochemical plant south of the city, the slick has passed through Harbin and is now headed for Russia. BBC's Louisa Lim joins us now from Beijing.

Louisa, thanks for being with us.

SIMON: If running water returns to Harbin by late Sunday, that'll be a day later than originally expected. Have freezing temperatures been a problem?

Ms. LIM: Well, freezing temperatures have been a problem only inasmuch as the freezing temperatures, even during the daytime, means that the Songhua River, which is so polluted, is beginning to freeze over, and that could be a serious problem. I mean, if you're standing on the banks of the river, you can see these great gray chunks of ice forming on both banks of the river. There hasn't been any mention at all in the official media of what that might mean. So a lot of people in Harbin, when I was there, were asking me: What does it mean that the river's freezing over? Because once it gets to winter it's frozen over for the entire winter. Could that mean that the benzene still is present in the ice? And our attempts to try to contact experts in China and ask them haven't been very successful.

SIMON: Now the newspapers, we understand, in China have actually been criticizing the slow response of the central government, which is just about unprecedented, isn't it?

Ms. LIM: It is very unusual, and I mean, what's interesting, I think, has been the way in which the condemnation in the newspapers has been framed. It has been framed in very harsh terms indeed. A couple of days ago in--a couple of papers were very aggressive. One of them said that if individual leaders tell lies, that constitutes a crime against society and that there are real dangers in this because it allows rumors to spread which could cause unrest.

SIMON: Premier Wen Jiabao made an unannounced visit to Harbin earlier today. Is that an indication that the Chinese government is, in fact, concerned about public support and public opinion?

Ms. LIM: Well, yes. I mean, I think it's a visit which has several messages. I mean, the first, I think, is to try to assure the people of Harbin that the central government is worried about them. But I think the second message is a political message. He's really come to give a bit of a warning to the local authorities because this whole saga highlights the gulf between central and local authorities in China. The central government has for the last couple of years tried to emphasize the importance of cleaning up the environment and has talked a lot about how pollution should be tackled, yet this shows quite how powerless it is because at a local level, often local officials often don't want to shut down polluting factories because it's an important source of revenue for them.