Accessibility links
Saddam Trial Poses Legal Challenges On the eve of the resumption of the trial of Saddam Hussein, an international monitor voices concern about the legality and fairness of the proceedings. Should the trial be moved?

On the eve of the resumption of the trial of Saddam Hussein, an international monitor voices concern about the legality and fairness of the proceedings. Should the trial be moved? 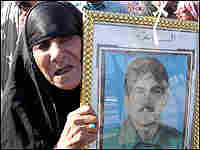 An Iraqi woman carries a picture of her son who was executed after the 1991 Shiite uprising as she takes part in a protest demanding the execution of Iraq's former dictator Saddam Hussein in Najaf. Getty Images hide caption 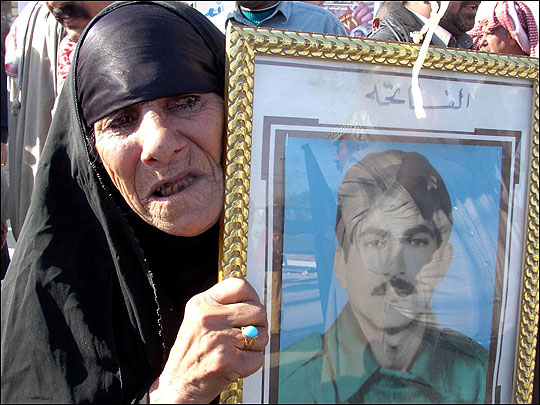 An Iraqi woman carries a picture of her son who was executed after the 1991 Shiite uprising as she takes part in a protest demanding the execution of Iraq's former dictator Saddam Hussein in Najaf.

In Iraq tomorrow, in a heavily secured Baghdad courtroom, former Iraqi dictator Saddam Hussein and seven co-defendants are due to resume their trial on four counts of murder, torture and other crimes against humanity. This week's session should feature the first testimony from witnesses and survivors of what the government says were Saddam's murderous reprisals against some 140 villagers in Dujail in 1982, but with two defense attorneys already murdered, security issues head the list of questions that includes wondering if Saddam can get a fair trial in his homeland. NPR's Peter Kenyon reports from Baghdad.

At a rally in Baghdad yesterday, demands for a swift trial of Saddam Hussein were matched only by the calls for his execution. Mohammed al-Faisal(ph) was there representing the Iraqi bar association.

Mr. MOHAMMED AL-FAISAL (Iraqi Bar Association): (Through Translator) As for the trail of Saddam and his assistants, this is a public demand and the right of the Iraqi people who earned this right through the blood of hundreds of thousands of martyrs killed by his thugs. Any procrastination will do the people great harm.

KENYON: But the decisions made by this court will have effects far beyond retribution for a fallen dictator. Iraqis who may some day find themselves before a judge will want to know if they'll be afforded due process or facing rough justice.

After attacks killed two members of the defense team following the trial's opening, the calls to move the proceedings out of Iraq intensified. Officials say it was only US guarantees of security that brought the defense attorneys back.

One of the observers in Iraq to monitor the trial is Miranda Sissons with the International Center for Transitional Justice. She says security was a troubling issue from the very beginning stages of planning the trial for witnesses as well as attorneys, but she says moving the trial has costs as well as benefits.

Ms. MIRANDA SISSONS (International Center for Transitional Justice): This is one of the most ambitious efforts at domestic prosecutions there's been in recent years. With the deteriorating security situation, it was always going to be difficult. There's no easy answer about whether the trial should be moved. Because whether or not you move the proceedings, there's still, you know, at least 10 cases being investigated here on Iraqi soil. And the absolute crux of the issue is, A, people's ability to conduct a fair and effective investigation and then their ability to conduct a fair and effective trial. And there's no easy answer.

KENYON: For witnesses from a village as small as Dujail where everyone knows everyone else, even attempts to hide their identity may not be enough to protect them. Sissons says it's a delicate balance, that judges must protect the witnesses and still afford the defense the opportunity to test the evidence and challenge testimony.

Ms. SISSONS: It'll be a defining moment because this is really when the court gets started. The judges have very broad powers in what they're going to allow as evidence. And how they let the defense present evidence is perhaps a key, key question for this session.

KENYON: Perhaps the greatest resource for information about the evolving and sometimes controversial field of international law, the United Nations, is keeping its distance largely because it won't be involved in cases that could result in the death penalty. Sissons says there's a huge weight of hope and apprehension resting on the shoulders of these five Iraqi judges who must answer the question: Can Saddam get a fair trial here?

Ms. SISSONS: That's the pivotal question, and obviously, it's not just about Saddam. It's about other key perpetrators who have command responsibility for what happened. It will be a great challenge. We have concerns about the fact that American policy decided that there be a domestic court to try these international crimes for the first time after 35 years of isolation. Now those judges seem to us to be personally committed, but they've got a hell of a job to do.

KENYON: Defense attorneys may ask for a lengthy postponement in the proceedings to prepare their case. The prosecution will press to get some testimony on the record. Meanwhile, Iraqi police say they've arrested eight people suspected of plotting to murder the investigative judge who prepared the case against Saddam.